2003 Flashback: Shania Twain & Alison Krauss Team Up For “Forever And For Always” 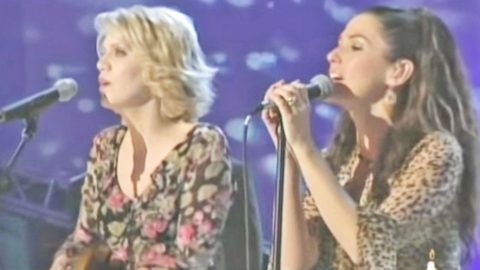 Country music stars Shania Twain and Alison Krauss had fans at the edge of their seats with their heavenly duet that angelically blended these two unique talents.

Joining the bluegrass band Union Station, these country gals stood side by side as they revamped the harmonious tune with their incredible voices and stage presence. Sporting a beautiful floral print blouse, Krauss graced the song’s backup vocals as Twain carried the lead throughout their performance.

The audience was mesmerized by the remarkable duet, giving the performers a lively ovation that was no doubt elicited by the sensational skill.

Twain’s ballad was originally released in 2002 on her fourth studio album Up! Aside from becoming an immediate fan favorite, “Forever And For Always” became the Song of the Year and earned its way as a staple to the singer’s musical career.

Be sure to check out the phenomenal performance below.