John Wayne Delivers With Patriotic Tribute To Our Troops, And It’s Amazing! 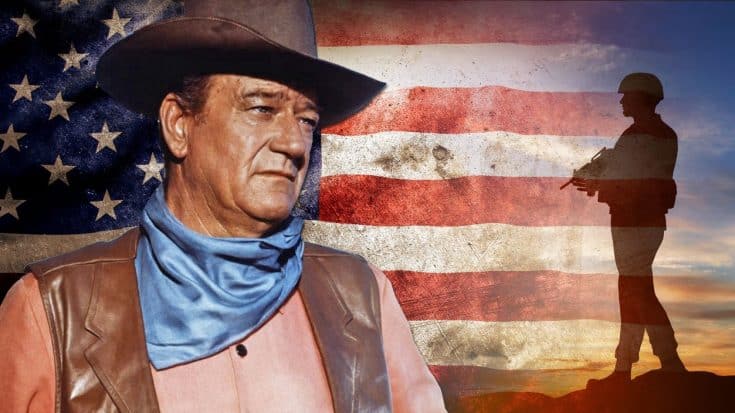 John Wayne is an American legend and an iconic actor that has portrayed cowboys, soldiers, lawmen, and so much more. When people think of John Wayne, they think of America, standing up for ourselves, being brave, loving your family and loving your country.

It goes without saying that John was a big supporter of America’s military and those who sacrifice so much for our freedom. So, when we came upon this fantastic video that pays tribute to the United States military, set to John Wayne reading the poem, “Why Are You Marching, Son?“, we just had to share it.

Y’all need to check it out.

WHY ARE YOU MARCHING, SON?

Why Are You Marching, Son? I’d really like to know!
Is it because of Valley Forge, or perhaps the Alamo?
Or, “One if by land–two if by sea,”
A trumpet’s call…the will to be free?
And what of a man who stood straight and tall,
Who wept silent tears when he saw brave men fall?
No matter–no difference–the blue or the gray,
All were his brothers…how often he’d pray.
And what of Antietam–that now peaceful stream
Where the water, blood-red, glittered and gleamed?
Appomattox…Chickamauga..Vicksburg…Bull Run…
Cumberland…Gettysburg…and then Washington.
Why Are You Marching, Son?
In Flanders Fields, how proud were they
Whose forms beneath the poppies lay.
Men who saw Verdun…
And died at the Marne…Soissons…
And those who tried the fearful foe at Chateau-Thierry,
Who fought and bled…whose hearts grew weary,
But in whose minds one thought kept churning–
That the torch of liberty keep burning.
Why Are You Marching, Son?
The planes swarmed in, and the rising sun
Glowed fiercely on the evil done
To men whose blood runs through our veins,
Men who died, and whose remains
Life forever locked in waters deep.
Now, is it right that they should sleep
While the warm sea laps at a twisted hull
And see the torch of liberty grow dull?
Anzio…Cassino…and the Po!
St. Mere Eglise…Le Mans…St. Lo!
Gardelegen…Buchenwald…
On and on the roll is called!
And why?…Why Are You Marching, Son?
Bugles shrilled in the frozen night,
And at first dawn, the awful sight
Of seas of men…row after row,
Left to die on blood-stained snow!
Pusan…Pyongyang…Suwan…Kyongju!
And blood-red ran the swift Yalu!
In South Vietnam the big guns roared,
And once again we fought a war
To honor a pledge our nation gave
To help that little country save
Her people from the certainty
That she’d be ruled by tyranny.
No matter where the big guns roar,
Our fighting men, like those before,
Take the torch we all hold dear
And face freedom’s enemies without fear.
Our fathers died from sea to sea,
And blessed the torch of liberty.
Why?…Why Are You Marching, Son?