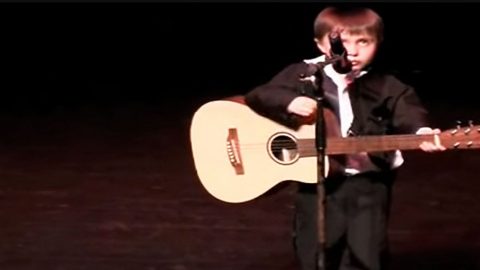 Snagging the title of the youngest recorded Johnny Cash impersonator, 4-year-old Valor Yost is a pure star in the making! Referred to by his stage name, The Kid In Black, Valor bears striking, yet miniature, resemblance to the country outlaw that entirely restructured the world of music.

Wielding a monstrous guitar that challenges his own size, the sharply dressed Valor is seen center stage as he eagerly begins his “Ring Of Fire” performance that is sure to fill your heart with wonder and awe! While strumming his guitar, Valor begins to produce his own vocal intro as he sings, “Da da da da da da da da,” replicating the iconic opening instrumentals!

However, this little star is far from over, as he smoothly transitions into one of the cutest performances we’ve ever heard! He sings, “I fell into the ring of fire,” as his little arm continues to strum away, keeping up with his musical entourage!

The audience bursts into laughter as Valor continues to sing the instrumental portions of the song, letting his eyes shift between audience members! Props to this boy and his parents for sharing such an incredible taste in music!

Check out his adorable video below!