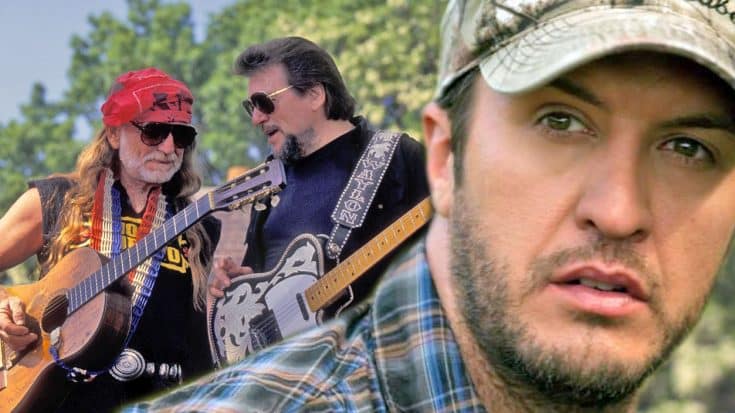 When Luke Bryan spoke about outlaw country in an interview with Hits Daily Double recently, he probably didn’t expect the backlash that he is recieving now. From fans and artists alike, Luke is taking a beating on social media for comments he made, regarding some country legends, that are being called “disrespectful”.

“Well, yeah. I think that people who want Merle, Willie and Waylon just need to buy Merle, Willie and Waylon. I’ve never been a ‘Those were the good old days’ kind of guy. I’m not big on looking back on the past. I’m not an outlaw country singer. I don’t do cocaine and run around. So I’m not going to sing outlaw country. I like to hunt, fish, ride around on my farm, build a big bonfire and drink some beers—and that’s what I sing about. It’s what I know. I don’t know about laying in the gutter, strung out on drugs. I don’t really want to do that.”

The comment criticizes a genre of country that has been around for longer that Luke has been alive. The outlaw country movement was started by some of country music’s most influential artist’s. That group include Merle Haggard, Willie Nelson, and Waylon Jennings, all great country legends who make up a distinct part of the country genre.

There have been more than a few responses to Luke’s comments, but the one that stands out the most would be Kathy Jennings response in a letter to the country star. She is the wife of Buddy Jennings,  Waylon’s son, and felt she needed to stand up for Waylon’s legacy and call Luke out on the comments he made about the artist. Her response is as follows:

To Luke Bryan :
I hope your family members are proud of you for using your WORLDWIDE platform to take the time to disrespect my Father in Law. You have managed to PROVE to the world your true self.
Albeit that Waylon’s drug use is well documented and something he overcame, I assure you, he was never “laying in a gutter.” At the peak of his career and drug abuse, he was making history and setting records. He, single handedly paved the way for you and everyone else to make music the way the artist wanted to make it. I’m not willing to waste my time to debate your “music” and / or the fact you have zillions of fans – I will however, not sit back and be quiet when you have so blatantly disrespected Waylon.
I recall the time I was at the Grand Ole Opry to visit with Andy Griggs, you were making your debut appearance. My friend that was with us had just seen your video. As we stood at the side of the stage, Jeannie Seeley was talking to us and you walked over to introduce your self to her and told her how much you admired her, she in turn introduced you to myself and my husband. I almost got a cavity because of the sweetness of the words coming out of your mouth – you told us Waylon was one of your musical heroes. You went on and on and on.
This is not about music, Outlaw Country, whatever – it’s about DISRESPECT.
You are a platinum, disrespecting, no singing, whining, grasping for media attention, a–hole. Use your platform for something good, instead of bashing the LEGENDS that came before you.

What a response! And she’s not the only one who is coming forward to call Luke out for his behavior. Fans and artists alike are telling him that he needs to apologize, but the only response that Luke made was on his twitter account. In a series of tweets he responded that he felt he hadn’t been disrespectful at all.

The entire quote says, “Hey guys I’ve been thinking about this all day, every now and then I feel I need to defend myself in this business. I did a great interview with many topics discussed. It’s so frustrating that something negative has spun out of the story. I would never speak against any artist. It’s not my style. I consider Willie, Waylon and Merle musical heroes. I was tryin to state what I was about and where I come from with my music. It’s simple as that. Love y’all. Signing off. Thanks for the love.”

So what do you think? Is his apology sincere enough? Or does Luke need to man up and simply apologize for being disrespectful to some classic legends? Let us know what you think.