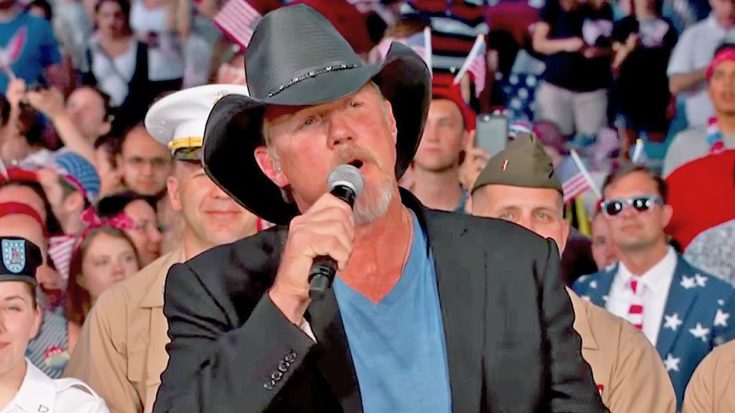 On September 28, Trace Adkins broke the news that many of his fans have been waiting to hear since he first released his latest album, Something’s Going On. That news centered on the release of a new single, and that new single is titled “Still a Soldier.”

Before Something’s Going On was available in full, “Still a Soldier” was one of the songs Adkins previewed off of it. He released a lyric video to accompany it, and fans fell in love with the song right away.

Since “Still a Solider” is still fairly new, we’re sure all of you Trace Adkins fans out there want to know everything there is to know about it. Well you’re in luck, because we have five fast facts about the song right here for you!

1. Adkins Recorded It Over A Year Ago

In an email to radio programmers after releasing “Still a Soldier” as a single, Adkins revealed it’s a song he’s had in waiting for a long time. “We recorded this song well over a year ago, and my intent was always to release it as a tip of my hat to those who have served,” Adkins said.

2. It Tells A Powerful Story

Written by Wade Kirby and Phil O’Donnell, “Still a Soldier,” tells a powerful story that anyone who has ever served in the armed forces can likely relate to. The song follows a veteran through his everyday life, as he goes about seemingly simple tasks such as cutting the grass.

But although he has now transitioned into civilian life, the man knows that he will always have the heart of a soldier. As Trace sings, “He still believes the American Dream. ‘Til his last breath he’ll always be a soldier.“

3. You Can Relate The Song To Current Events

Although the song was recorded over a year ago, “Still a Soldier” has a strong connection to current events. Last year, NFL player Colin Kaepernick caused quite a stir when he chose to kneel as a form of protest during the National Anthem. This year, more NFL players and teams have followed suit, causing quite an uproar among some, especially country fans.

“Still a Soldier” directly acknowledges this controversy through one of its earliest lines. It goes as such, “He’ll stand up when he hears the anthem. And that won’t ever change.“

4. Adkins Can Personally Relate To Its Message

Months ago, Adkins filmed a special series of behind-the-scenes clips explaining the meanings to all of the songs on Something’s Going On. In his video about “Still a Soldier,” he shared that he actually knows people like the man described in the song, which is why it is personal to him.

“I know so many of those guys, those separated service members that still, if they were called on the day they’d go get on a plane and head back over there in a heartbeat,” he said.

5. The Lyric Video Is As American As Can Be

Like we mentioned earlier, Adkins released the lyric video for “Still a Soldier” long before Something’s Going On ever had a spot on the shelves. For those of you who haven’t seen it yet, the video is full of patriotic imagery, and is as American as it can possibly get.

Even if you have seen the lyric video for “Still a Soldier” before, we’re sure you want to watch it again. You’re in luck, because you can catch it down below.