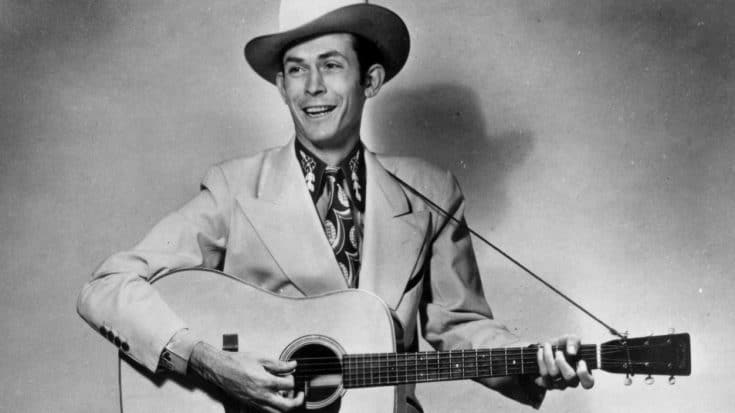 He was a legend by all accounts. A legendary songwriter, an incredible singer, and a phenomenal storyteller.

His life ended too quickly, but the legacy he left behind will never be forgotten. Hank Williams is by far one of the most significant and influential musicians of all time. During his career between 1947-1952, he released 31 singles and even more were released posthumously.

Digging through the archives of the Internet, we have discovered five recordings and/or performances that hardly anyone has seen or heard. We are thanking our lucky stars we did because these videos are pure gold.

Williams is in the far right corner playing guitar, wearing a tasseled jacket and cowboy hat.

Although he didn’t have a solo in the number, this performance is still something else!

In 1950, Williams began recording music as “Luke the Drifter.”

We’ve uncovered a rare demo of “Luke the Drifter” singing “Help Me Understand.” There is an additional verse and chorus that Williams left out of the studio recording.

A simple recording of Williams and his guitar playing the heartbreaking song “Angel of Death” will make you miss him even more after hearing the way he delivers the powerful lyrics.

Williams released this song in 1952 and it was a major hit! It reached No. 2, but not without its fair share of problems. Apparently, Williams had attempted to record it several times, beginning in 1947.

You’re in for a real treat with this recording. When Williams was just 15 years old, he won a singing competition, which made him very popular on his local radio station. Listeners would call in and ask for the “singing kid.”

They got so many requests that the station hired him to host his own 15-minute show twice a week!

We’ve discovered part of one of these shows, and it’s absolutely incredible. You are about to listen to a huge piece of country music history as he performs “Fan It” and “Alexander’s Ragtime Band.”

We hope you enjoyed listening to these recordings as much as we did putting them together for y’all!