Sisters Of The Bride Give The Greatest Wedding Toast Of All Time! (WATCH)

By Jennifer Pernicano on July 23, 2015
Advertisement 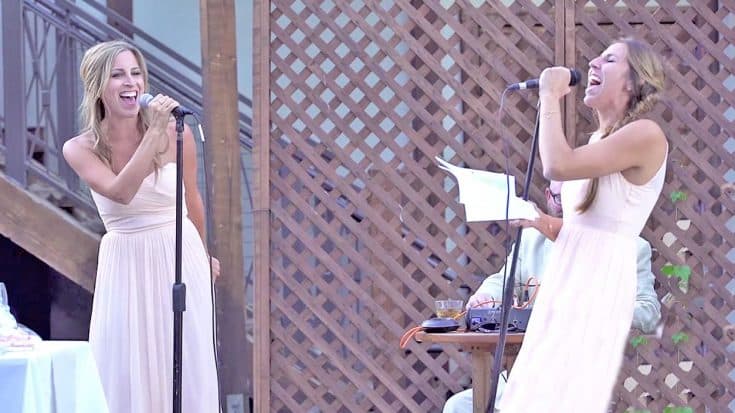 These have to be the best sisters ever! Kelsey and Maddie Hallerman served as co-maids of honor at their older sister Caitlin’s wedding. When it was time to make the toast, they changed the words to some well known songs for, what may be, the best wedding toast ever!

They start by saying that they’ve lived in Caitlin’s shadow their whole lives (which is probably true for any younger sibling!) and it’s time for them to step into the spotlight! You already know this is going to be amazing from the way they are addressing the crowd!

The younger sisters kick off the toast with Tracy Chapman’s “Give Me One Reason” and walk us through the bride’s childhood with Jackson 5’s “I Want You Back.” Then they sang about how the couple met with the Backstreet Boys hit “Everybody.” In Michael Jackson’s “Black or White” they described how the groom, John Weaver, proposed to Caitlin after a day of housework.

Where Kelsey and Maddie truly shined was their closing song, the gospel tune “Oh Happy Day.” The commitment from the two is insane and inspiring! The bride and groomed looked shocked and amazed! She even wiped away a few tears from laughing so hard!

You can hear Caitlin say, “This is the best thing I’ve ever seen. It’s gonna go viral on YouTube.” And she was right!! This video has been going around the Internet and everyone has been able to watch these sisters’ hilarious and amazing toast!

In an interview, Maddie said, “We didn’t hold back…sorry to everyone’s eardrums. What we lack in talent, we make up for in enthusiasm.” Caitlin knew her younger sisters had something planned, but not to this degree! She was told their toast would be high risk, high reward!

They got their reward with a standing ovation from the crowd and people swarming them after the performance! We can’t wait when Kelsey or Maddie get married! We’re sure that toast will go viral too!

Watch the amazingly hilarious video below!