By Jennifer Pernicano on July 27, 2015
Advertisement 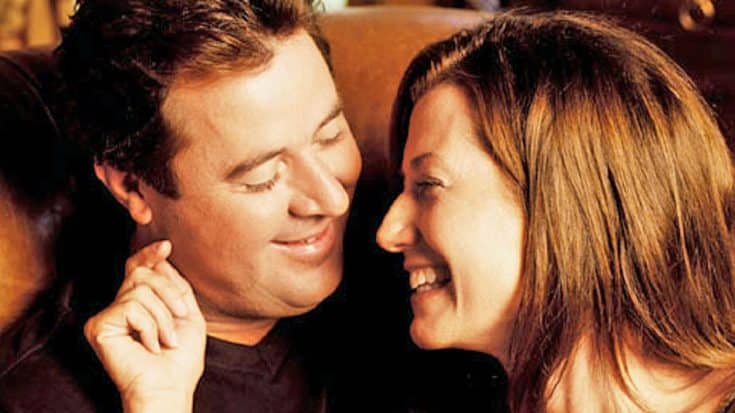 Vince Gill and Amy Grant‘s love story is one for the books.  After meeting while singing the duet “House of Love,” the two fell in love at first sight.

Although they were both married to different people at the time of their meeting in 1994, neither pursued each other until their marriages were over many years later. Gill always thought that they were destined for each other and would unite at an old age.

We’re glad they did reunite and marry in 2000, because they have produced so many wonderful musical moments for all of us to enjoy!

At a concert in Tennessee in 2013, Amy was playing a show and invited her country star husband to the stage. She introduced him saying:

“I gotta tell you, my life would be nothing the way it looks like it does today if it weren’t for the man who loves me so well. And he is leaving town in the morning, but I’m so glad he’s here tonight. Please welcome the love of my life, Vince Gill.”

When he takes the stage, he is welcomed by a loud applause. He talks to the crowd a bit about how he wrote a song for his beautiful wife and admits that he hasn’t recorded the song yet, but he “will someday!” The song is titled “The Red Words” and is a faith-based song and a beautiful one at that.

When introducing the song, Vince says, “It’s only appropriate to sing a song about why we all love her. It’s easy. Easiest thing I’ve ever done.” It is followed by a simultaneous “Awwww!” from the crowd.

Watch the beautiful performance below. You’ll be glad you did.