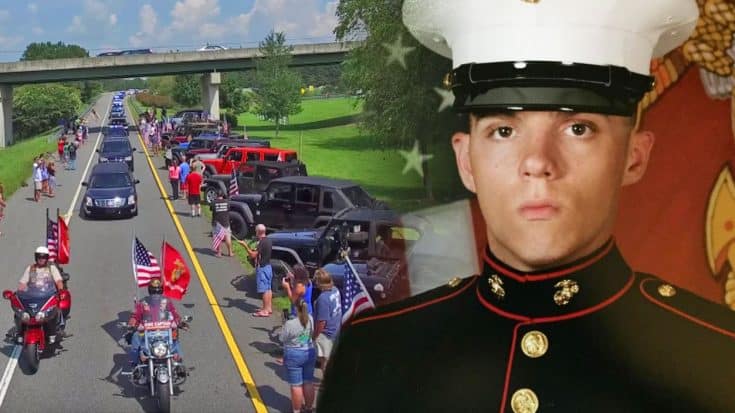 In this incredible, high-definition footage shot by a drone, we’ll see the moving footage of Lance Cpl. Skip Wells‘ funeral procession, one of the four Marines that were senselessly murdered on July 16 in Chattanooga. A fifth victim died a few days later after being injured.

While Benjamin Francis Leftwich’s “Atlas Hands” plays in the background, we see a bird’s eye view of a procession fit for a hero. People are lined up and down the highway, waving American flags and showing their support for the fallen soldier.

Without a doubt, this footage will give you chills and cause a tear or two to fall. Lance Cpl. Skipp Wells was laid to rest at the age of twenty-one in Cherokee County on Sunday, July 26. He was interred with military honors at Georgia National Cemetery.

Wells gave his all for this country and will be remembered as such. “He cared more about his fellow Marines and the mission than he did his own well being,” Wells’ supervisor, 1st Sgt John Coyne told MyFoxAtlanta. “That’s what he was doing on July 16 — disregarding his own safety so that others might survive.”

Our thoughts and prayers are with Wells’ family and friends and all those who have been affected by this senseless act. A big thank you to all those who serve and have served.