Robin Williams *IS* The American Flag In This Hysterical Comedy Routine 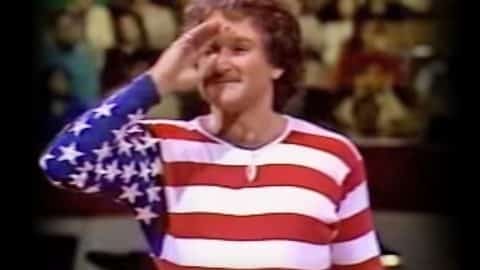 In 1982, Robin Williams took over the stage with his “I Love Liberty” comedy routine where he plays the American flag and goes through its history in a very comical manner, but at the same time, he exudes complete patriotism. This was all part of a two-hour television special created by Norman Lear and presented by People For the American Way.

Throughout this 5-minute monologue, Robin uses wordplay to clue us in on the history of the American flag and the U.S.

While it’s a comedic routine, there are certain parts that make our chests swell with pride.

“But people haven’t always been respectful to me. Sometimes it’s been rough. There’ve been some people trying to spit on me, trample me, burn me. Foreigners and occasionally some Americans too. I don’t let it get me down because I’m not a stay-at-home kinda flag.“

Williams even sheds light on lack of patriotism that was as real in 1982 as it is today. “I haven’t been getting out much lately. I guess it’s not very chic to put out the flag anymore,” he says.