Simon Cowell Stops Young Boy’s Audition After Few Seconds, What Happens After Will Give You Chills 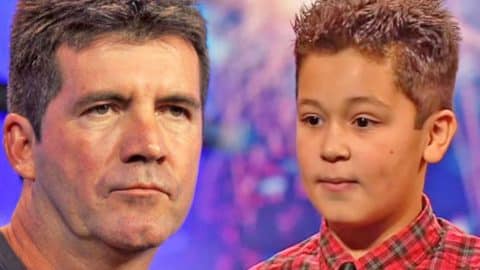 Simon Cowell is known for being opinionated, painfully honest, and sometimes brash. He recently showed some out of the ordinary emotion, but for the most part, he is who he is.

When schoolboy Shaheen stepped on the Britain’s Got Talent stage, he had all the confidence in the world. He was planning on singing his favorite song, “Valerie” by Amy Winehouse. He sings it all the time for family and always gets a good response from them.

Just a few phrases into the song, Cowell waves his hands in the air and the music stops. Shaheen looks terrified. As does his mom, the other judges, and the entire audience.

“You got this really wrong,” says Cowell. “What do you sing apart from that?“

Little Shaheen took a breath and said, “Who’s Loving You by Michael Jackson.” Cowell apparently was okay with this response and let him sing again.

The moment the young singer belts out the first word, the crowd goes wild and Simon gets a look on his face as if he was saying “I told you so.”

Each time he belted a note, the crowd cheered louder! His performance ended with a standing ovation from the audience and all three judges.

“This is how one song can change your life. And this may be the start of something special for you, young man.”

Judge Amanda Holden tells Shaheen he gave her goosebumps, and we got them too. There’s no surprise this talented singer went through to the next round, and made it all the way to the finals.

He sure has a long career ahead of him, and we can’t believe it started with Simon cutting off his audition! Watch the incredible video below.