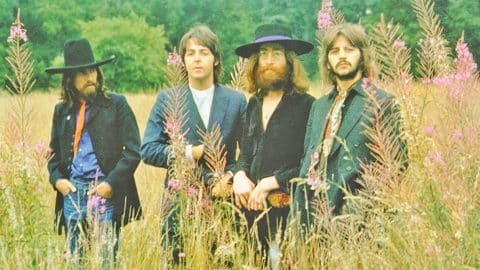 Showing just how strong the roots of country music are, a new book uncovers how country shaped The Beatles‘ music.

The 26th book by Don Cusic, ‘The Beatles And Country Music‘, details how each of the bands members had a bit of inspirational twang.

Already available, this book ventures into how George Harrison chose to play a Gretsch guitar; something that was inspired by Chet Atkins who also played on a Gretsch. Ringo Starr on the other hand, was deeply swayed by Gene Autry and Sir Paul McCartney even had recording sessions with Lloyd Green in the 70’s.

Cusic goes on to reveal that even Chet Atkins played on a McCartney song among other country artists who covered many of The Beatles’ hits over the years. The Beatles, themselves, even released a few twangy hits – mostly derived from Ringo’s country side. The most popular of these is “What Goes On“.

Check out this country-inspired Beatles hit in the video below!