Trumpeter Starts Playing ‘Amazing Grace,’ What Happens Next Will Take Your Breath Away 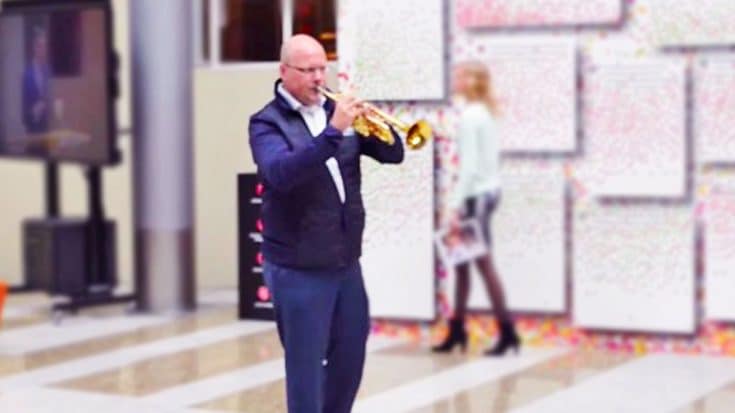 It seemed to be just another normal work day, with people walking from one office to another.

But suddenly, a man emerges out of the crowd and starts playing the trumpet.

The man starts playing the first few notes of “Amazing Grace,” the sound of the trumpet echoing triumphantly off the walls. But what happens next adds a whole new level of beauty to the performance.

The man pauses playing for just a moment, as voices can be heard starting to sing the first few words of the hymn. A group of women come walking towards him as they sing, and it is then made clear that the man’s solo was part of a larger flash mob performance.

One by one, more people join in the song, and soon it seems like almost everyone in the building was in on the flash mob. Voices both high and low harmonize with one another beautifully, as the first man continues playing his trumpet.

It isn’t long before the performers draw in a large crowd, who watch them from a balcony above.

At the end of the performance, the volume of their voices increases significantly. But shortly afterwards they drop down their voices and go back to singing softly for last few words of the hymn. Such a dramatic change in volume makes for a powerful end to a stunning performance.

Watch the flash mob’s breathtaking performance of “Amazing Grace” in the video below.