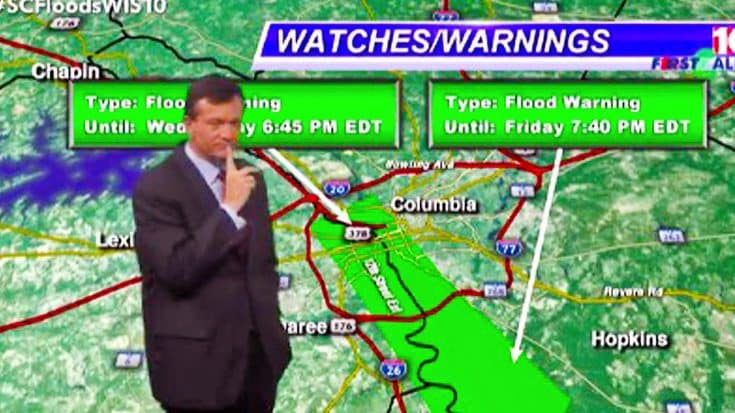 True happiness can sometimes be found in the simplest things.

After experiencing historic flooding over the weekend, South Carolina finally got a glimpse at the sun for the first time in days. A total of 15 people were killed as a result of the flooding, and countless homes and roads were destroyed.

So when WIS 10 News weatherman Tim Miller came on the air to talk about the weather, he couldn’t help but get a little emotional over the sight of the sun.

The camera shows the sun shining down on a South Carolina street, prompting Miller to say “Well, how about that?”

He walks in front of the shot to begin his forecast, but finds himself so overwhelmed with emotion that he has to walk back off-screen.

“I don’t know what to say. Sunshine. That’s amazing,” he says, taking deep breaths as he tries to compose himself.

Miller tries yet again to start his forecast, but is still too emotional to move forward.

After trying to pull himself together off-screen, Miller comes back into focus in order to start his forecast, but he never does get rid of the emotion in his voice.

Miller proves to us in this video that we should never take anything for granted, even something that seems as constant as the sun.

Our thoughts and prayers are with all those affected by the flooding in South Carolina.