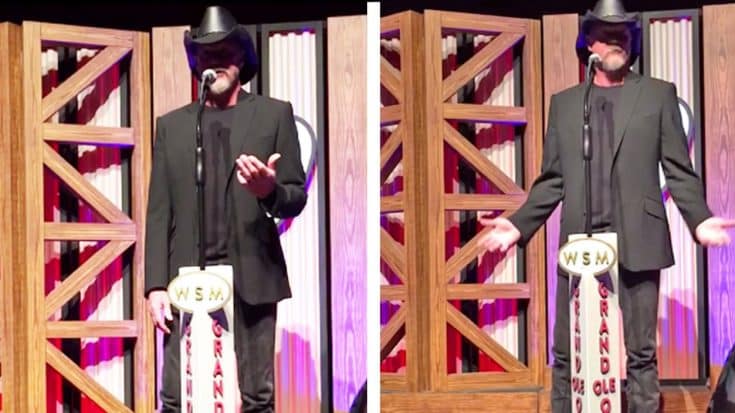 After more than 20 years in the country music industry, Trace Adkins appears to be confident in himself as a performer. But the “Honky Tonk Badonkadonk” singer wasn’t always that way.

Recently, Adkins performed as one of the main stars during the Grand Ole Opry‘s 90th anniversary celebration. Adkins delivered a solid performance of his #1 hit “Ladies Love Country Boys”, along with a cover of Don Williams’ “‘Till The Rivers All Run Dry“.

But Adkins revealed to reporters at the event that his first Opry appearance nearly didn’t go so well.

“I was scared to death,” Adkins said. “I’ll never forget that.”

In fact, Adkin’s first Opry appearance almost didn’t happen. Due to a miscommunication, Adkins showed up without his band, and the Opry‘s house band had to rush in order to learn his song in time for his performance.

Since then, Adkins has returned to the Opry stage time and time again, and officially became a member in 2003.

Adkins has gone on to serve as a source of inspiration and a mentor to other artists, including Blake Shelton, who Adkins invited to join the Opry in 2010.

Today, Adkins’ positive memories of the Opry far outweigh the memory of his first appearance there.

“I love coming out here and listening to these folks [sing] these songs that I’ve heard growing up,” he said.

We sure are glad that Adkins didn’t let his first Opry experience scare him away from performing!

Watch the video of Adkins talking about his chaotic Opry debut below.