‘That Scared The Sh*t Out Of Me!’ – Luke Bryan Reacts To Out-Of-Control Fan 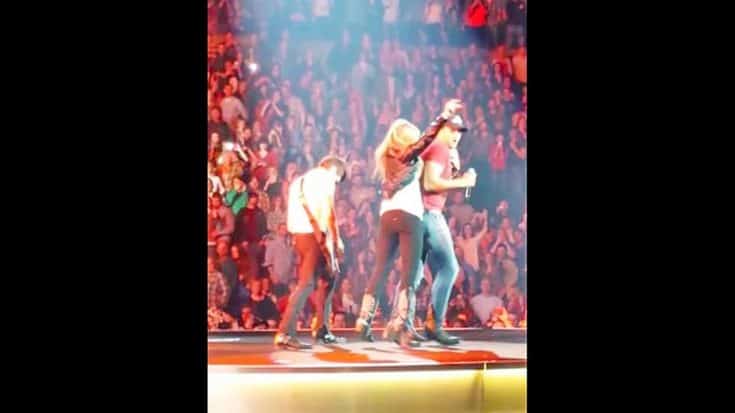 There are ladies all over the world who would jump at the chance to get close to Luke Bryan.

Well one girl at a 2014 concert in Wilkes Barre, Pennsylvania, did just that.

In a video from the concert, Bryan is singing his hit single “Country Girl (Shake It For Me)” and walks toward the edge of the stage to start shakin’ it for his fans.

As Bryan has his back turned, a girl wearing a leather jacket jumps out of the crowd and wraps her arm around his neck, looking like she is trying to hug him. Bryan quickly runs away and security comes and yanks the girl off to the side.

The whole time this incident goes on the band keeps playing, but it takes Bryan a little while to get back into singing the song. “That scared me!” he says.

After taking a moment to collect himself, Bryan can’t help but joke about the whole situation, “she was ready to shake it right there.”

Bryan finally gets back into the swing of the song, and does a good job at shakin’ it for the crowd, rather than shaking in fear of the girl that had jumped on him.

We hope that girl thinks her actions were worth it, because after that incident we doubt that she’ll ever be able to see Bryan again. What a shame that would be!