By Jennifer Pernicano on April 5, 2016
Advertisement 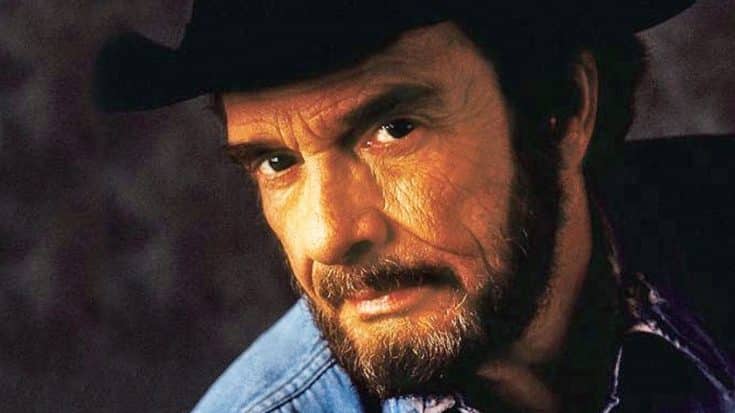 When Merle Haggard broke out on the country music scene in 1963, he didn’t look back.

He has been making music ever since and is considered a pioneer and a legend. He helped grow the outlaw movement in the 1970s and his success earned him an induction into the Country Music Hall of Fame in 1994.

Not only is a a legendary singer, he is also a legend for not giving a crap!

We have compiled a list with the top 7 times Merle Haggard was a complete and total badass.

7. The Time Johnny Cash Caught Haggard Imitating Him – And The Hag Didn’t Care!

Haggard has been known to do an impression or two, and they are SPOT ON! While he was on The Glen Campbell Goodtime Hour and did impressions of Marty Robbins, Hank Snow, and Buck Owen. Owen showed up to surprise Haggard in the middle of his performance and convinced to do his Johnny Cash impression. Turns out, Cash was there too! And it was hilarious!

6. The Time He Recorded A Duet With Clint Eastwood – And Hit No. 1!

Haggard’s most prominent duet partner is Willie Nelson, but in 1980, Haggard and Clint Eastwood recorded a song together for the soundtrack of the movie Bronco Billy. The song is called “Bar Room Buddies” and it hit No. 1 on the Billboard country charts, making it Haggard’s 25th No. 1.

5. The Time He Beat Cancer

In May 2008, Haggard was diagnosed with lung cancer, but didn’t announce it to the world until months later. In November 2008, he had surgery to remove the tumor in his lung and made his public announcement about his illness just a few days later. As of January 2009, he was cancer free.

4. The Time He Told Off A Record Executive For Firing Johnny Cash

In 1986, Johnny Cash was dropped from his record label and 23 years later, Haggard was not ready to let it go. At a 2009 event, Haggard was awarded with a career achievement award from Country Radio Broadcasters and used his acceptance speech to tell off Rick Blackburn, who was the person who dropped Cash from his label.

That night, Emmylou Harris performed Haggard’s song “Kern River” and he told a story of Blackburn not liking the tune at all. Haggard told the audience that Blackburn said, “I’d like to tell you one more time. I don’t like ‘Kern River.’ And I said, ‘That’s about the third time you’ve told me that.’ He said, ‘It’s more like five times.’ And I said, ‘Well, I’m about five times short of telling you to go to hell.’”

He asked Blackburn,”Who do you think you are? You’re the son-of-a-bitch that sat at that desk over there and fired Johnny Cash. Let it go down in history that you’re the dumbest son-of-a-bitch I’ve ever met.”

Haggard had a tough upbringing, which led him to rebel. He was arrested for burglary, writing fraudulent checks and more. He ended up in jail more than a few times and in an interview with Vanity Fair, he revealed that he escaped from jail a total of 17 times, all by the age of 19. After that, he was transferred to San Quentin Prison because he was an escape risk.

2. The Time He Saw Johnny Cash Perform In Prison Once Haggard was released from prison and became a country star, he finally formally met Johnny Cash – in a men’s restroom at a television station. Haggard reminisced with Cash about his past performance at San Quentin, and Cash said, “I don’t remember you playing at that show, Merle.” Haggard had to inform him that he was actually in the audience. Cash’s performance inspired Haggard to clean up his act and become a country singer.

1. The Time All His Crimes Were Pardoned By Ronald Reagan Because Haggard had such a long rap sheet, it was hard to get his crimes and escapes pardoned. For twelve years after his release, he tried and tried, with no avail. In 1972, then-California Governor Ronald Reagan pardoned Haggard for ALL his past crimes. In an interview with CMT, Haggard said, “He didn’t have to do it at all. He could have just snubbed his nose and went on to lunch.”

Ten years later, Reagan was voted President of the United States and Haggard sang at a concert in celebration. “I hope the President will be as pleased with my performance today as I was with his pardon 10 years ago.”