7 Facts About The Movie “Urban Cowboy”

By Miranda Raye on December 12, 2017
Advertisement 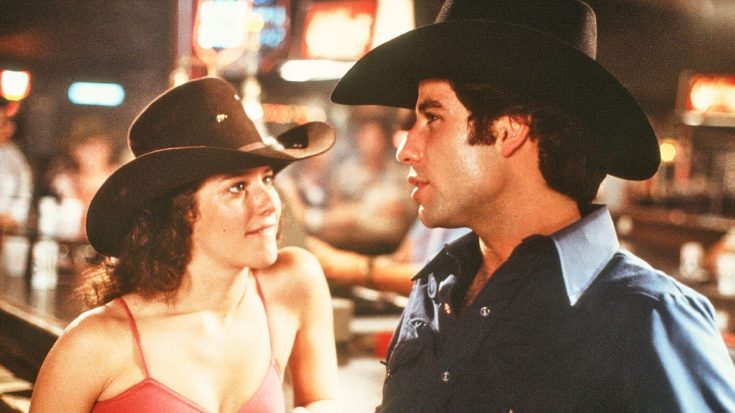 We’re sure you knew that Olivia Newton-John had a successful country music career. But did you realize that her Grease co-star John Travolta also played a huge role in shaping country music?

While Travolta never became a country singer like Newton-John, he did star in a film that started a revolution in country music.

That film was Urban Cowboy, which is credited for kickstarting the pop-country movement that took place in the 1980s. Appropriately, that movement is often referred to as the “Urban Cowboy Movement.”

Numerous songs on the soundtrack went on to become major hits, such as Johnny Lee’s “Lookin’ for Love” and Mickey Gilley’s “Stand by Me.” You’re probably still listening to them today!

While you know that Urban Cowboy featured some incredible country music, we bet there’s a few facts about the film that you don’t have a clue about. Want to know what they are? Then head down below to find out!

1. The Script Was Written With A Different Lead Actor In Mind

Although we can never imagine anyone else but Travolta as cowboy Bud Davis, the role wasn’t meant for him. The script was originally written with a different actor in mind…Dennis Quaid.

For whatever reason, Quaid was never cast in the role, and the part went to Travolta. But Quaid managed to keep busy, starring in Gorp and The Long Riders, which were released the same year as Urban Cowboy (1980).

2. “Loretta Lynn” Was Considered For The Female Lead

No, it’s not what you think. The real-life Queen of Country never auditioned to play Bud’s love interest Sissy in Urban Cowboy. But Sissy Spacek, the actress who played Lynn in Coal Miner’s Daughter, was one of the main actresses considered for the role.

In the end, it was Debra Winger who won the role as Sissy in the film. Spacek still got plenty of recognition in 1980, since that was the same year that Coal Miner’s Daughter debuted. She eventually won the Academy Award for Best Actress for her portrayal of Lynn.

3. Both Leads Had Disco Expertise

The 1970s were all about disco movies. Travolta starred in one of the most well-known disco flicks of all time, 1977’s Saturday Night Fever. But it turns out that his co-star also had disco movie experience!

While you likely knew about Travolta’s role in Saturday Night Fever, we bet you didn’t know about Winger’s part in another disco movie. She discoed her way through the 1978 film Thank God It’s Friday.

Notice something else? Both Travolta and Winger’s respective films were named after a day of the week!

4. The Plot Is Based On A Real-Life Love Story

A large portion of the film takes place at a honky-tonk named Gilley’s. Turns out that Gilley’s was a real-life bar in Pasadena, Texas, with a real-life romance that ended up inspiring the film.

The plot of Urban Cowboy is based slightly on the relationship between a man named Donald “Dew” Westbrook and Betty Jo Helmer. The two met at the real Gilley’s bar when they were 18 and married within months. They even had their wedding reception at Gilley’s!

Sadly, the couple had separated by the time Urban Cowboy started filming. They eventually divorced.

At least Bud and Sissy had a happy ending!

5. The Prison Rodeo Scene Is As Real As It Gets

One of the highlights of the film is a rodeo scene that takes place in a prison. You would expect the scene to have been shot in an abandoned warehouse or soundstage of some sort, but that’s not the case. Believe it or not, that scene was as real as it could get.

That famous scene was shot at a real prison, which was located in Huntsville, Texas. Not only that, but the prison had actually been hosting real-life rodeos there for the past several decades!

Thanks to Saturday Night Fever and Grease, Travolta was one of the biggest movie stars at the time that Urban Cowboy was released. You would think that his star power would have sent teens flocking to see Urban Cowboy, but that wasn’t what happened.

Although Urban Cowboy went on to make a modest showing at the box office, it was a bit of a flop at the start. Since the box-office data was so low, a newspaper poll was taken to find out why teens didn’t seem interested in the film.

So what was one of the main things that kept teens away from the theaters? They didn’t have any idea what the word “urban” meant.

Despite teens’ initial lack of enthusiasm about the film, it went on to gross nearly $47 million.

Seven years after the release of Urban Cowboy, Patrick Swayze would star in one of the most beloved films of all time…Dirty Dancing. But back in 1980 he was fresh off his debut movie role in the roller disco flick Skatetown, U.S.A.

Swayze was only 28 years old when they were working on Urban Cowboy. Even at that early point in his career, his talent as a dancer was something no one could ignore, including Travolta.

Even though Travolta had shown off plenty of dance moves in Grease and Saturday Night Fever, he needed someone to teach him how to two-step. Swayze was that someone!

Urban Cowboy also marked the film choreography debut of Swayze’s mother, Patsy Swayze, who went on to choreograph other films such as Hope Floats and Liar’s Moon.

There you have it folks! Which of these seven facts about Urban Cowboy surprised you the most? Let us know!