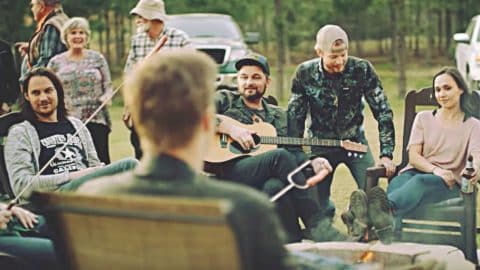 Every time the Home Free guys put together a new album, you can expect to hear the perfect blend of covers and originals. While the famous a cappella group got their start on (and won!) The Sing-Off by singing covers of country and pop hits, their original songs are some of the brightest gems in their catalog.

Home Free’s latest album, Timeless, showcases a number of original compositions, with each one having a unique theme and style. There’s the romantic “When You Walk In,” the sultry “It Looks Good,” and the groovy “Good Ol’ Boy Good Time,” just to name a few.

The latter song is the most recent in Home Free’s collection to earn the music video treatment. In a full embrace of the song’s fun-lovin’ nature, the guys decided to capture that same sort of feeling in their music video for it. To do so, they set it during the season that’s perhaps best known for being a source of fun times…summer!

Just in time for Memorial Day weekend, Home Free decided to welcome the start of the summer season in their video for “Good Ol’ Boy Good Time.” Shot in high tenor Austin Brown’s Georgia hometown, the video shows all of the Home Free guys playing games, dancing, fishing, and enjoying some good grub at a cookout out in the country.

In addition to being shot in Brown’s hometown, the video places him front and center as the lead soloist. Since he had such a central role in the video, it only made sense that he got to add a bit of a personal touch to it.

He did so by inviting his friends and family members to star alongside Home Free in the video. In fact, most of the people that you see in the video are his family and friends!

Get Ready For Some Fun Times In This One

As you can see in the clip, Foust seems a bit uncertain about the way that Lundquist is preparing to shoot the arrow. His fear is well-founded, because instead of hitting the target Lundquist ends up shooting the arrow into the backside of baritone singer Adam Chance.

That little snippet should serve as enough proof to you that you’ll be highly amused by Home Free’s new video for “Good Ol’ Boy Good Time.” The video will get you all pumped up to gather your friends and family to have a good time of your own!