7 Times Toby Keith Was The Definition Of Bad Ass 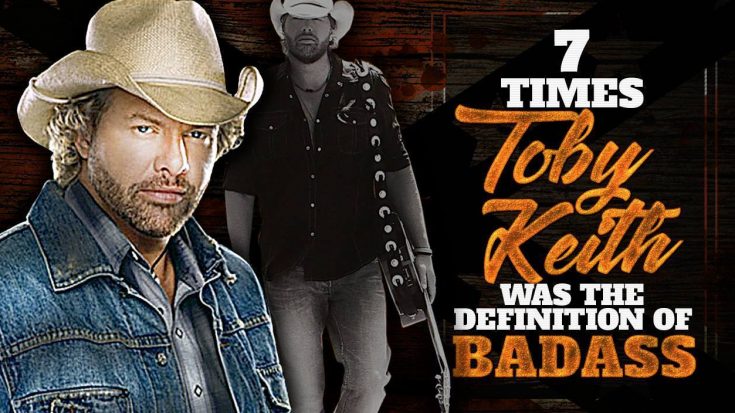 Since his debut in 1993, Toby Keith has proved time and time again how much of a bad ass he is!

He’s unapologetically patriotic in songs like “American Soldier” and “Courtesy of the Red, White, and Blue,” and often brings out veterans or active military members on stage with him. He built a very successful career on taking crap from anyone, which is why we figured a list of all the reasons Keith is a bad ass seemed pretty fitting.

Let’s take a look at seven times Toby Keith was the definition of the term “bad ass.”

1. When He Started His Own Record Label

Keith has been around the country music world for some time now and when he wasn’t satisfied with any of the record labels, he started his own.

2. When He Pledged Allegiance To A Brand

It’s the age-old debate for truck owners. Ford or Chevy? Keith made up his mind early on and even became a spokesman for his preferred model – Ford!

He filmed a few commercials over the years for Ford, which included him singing a song called “Ford Truck Man.” Watch the commercials in the video above.

When Keith released this hard-hitting song, he already had a few number ones under his belt and was on his way to country music super stardom. He unveiled “How Do You Like Me Now?!” as a message to all the people in his past who never gave him the time of day, but now that he was famous, were all trying to be his friend or even more.

In his biography on Way Back Machine, Toby stated that the idea for the song came from his personal catch phrase.

“Initially, I said, ‘Here’s my title: “You Never Loved Me Before, So How Do You Like Me Now?’” he wrote. “A lot of people become successful after they’ve been told they won’t ever be, so people can relate to this.”

Went for Mexican food with Toby and he took over the karaoke….. Seriously a night to remember.

In May 2016, Keith joined Merle Haggard’s son, Ben, and his legendary band, The Strangers for an epic tribute at the American Country Countdown Awards. After the show, young Haggard, Keith and friends went to a local Mexican restaurant and they just so happened to have karaoke going that night.

Of course, Keith got up to sing, but not just any old song, he sang Kenny Roger’s “Lady” – and with passion!

5. When He Wasn’t Going To Apologize For Being Patriotic

Most Keith fans know that he closes out most shows with “Courtesy Of The Red, White, and Blue,” sometimes letting a veteran or active duty military member say the passionate lyrics, “‘Cause we’ll put a boot in your ass/It’s the American way!”

Besides being an all around bad ass song, it actually has a pretty emotional backstory. He took inspiration for the song from the car accident that killed his father, an Army veteran, in March 2001, as well as the September 11th attacks later that year.

Following the tragic attack, Keith sat down and wrote “Courtesy of the Red, White, and Blue” in 20 minutes. Apparently, he was reluctant about recording the powerful song, but after some persuading from Commandant of the Marine Corps, James L. Jones, it has become the song we know and love today.

He also ends every show by saying, “Never apologize for being patriotic!”

On February 6, 2016, Merle Haggard was playing a show in Las Vegas and Keith just so happened to be in town. Just two months prior, Haggard was diagnosed with double pneumonia and was ordered by doctors not to perform, but he didn’t listen.

Before the show, Keith stopped by his dressing room and Haggard asked him how many of his songs he knew.

Haggard then asked Keith to join him on stage for the show, and when he wasn’t able to sing anymore, Keith took over for him. This show turned out to be one of Haggard’s last concerts ever, as exactly two months later, Haggard passed away.

7. When He Recorded A Song With Country Legend Willie Nelson

They may seem like an unlikely duo, but truth is, they make great duet partners!

In 2003 the pair released the catchy song “Beer For my Horses,” which stormed the charts and held the No. 1 spot for a total of six weeks! They starred in the epic music video, which features them as a father-son detective duo solving a crime.

It doesn’t get more bad ass than that! Let us know which bad ass fact was your favorite!