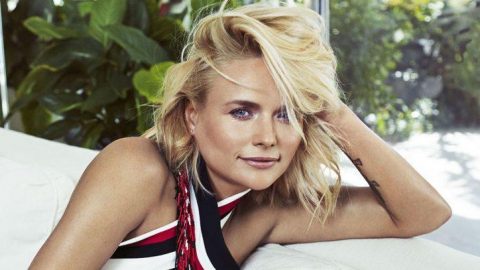 Since Miranda Lambert competed on the reality show Nashville Star in 2003, she immediately became a huge star. Although she didn’t win, she has become the most famous singer to come out of the show.

Throughout her career, Lambert has been very open and honest with her fans in every aspect of her life, but there are a few things that we don’t know about her.

From musical heroes to favorite past times, it seems we don’t know the “Gunpowder & Lead” singer as well as we thought!

Let’s take a look at the 7 things most people don’t know about Miranda Lambert.

1. She Has Her Own Line Of Wine

She named her wine line Red 55 Winery after her red ’55 Chevy that she plans on keeping forever. The line includes the “White Liar” chardonnay, the “Kerosene” pinot grigio, and the “Crazy Ex-Girlfriend” sweet white.

2. She Has A Box Cutter On Stage At All Times

While some fans love tossing beach balls around during concerts, Miranda thinks there is a time and place for that and it’s not when she’s singing “House That Built Me.”

“When I’m singing a ballad onstage and a beach ball comes flying at my head, it makes me crazy,” she told PEOPLE Magazine, “so I keep a box cutter on my drum riser for such occasions.”

Both Miranda’s parents worked as private investigators in their hometown of Lindale, Texas. The business went dry for some time, which forced the Lambert family to move out of their house.

“We were homeless,” Lambert’s mom told the Associated Press. They bounced around from family and friends’ houses until they were able to buy a house again.

4. She Has A Connection To A Former President

As stated earlier, Miranda’s parents were private investigators. They mostly worked with battered women to protect them from their abusive husbands. While the country star did know how to ride horses, she wanted to take her love for the animals and the sport to a new level. She started taking riding lessons and competing in equestrian events.

“I knew how to ride a little bit here and there, but I wanted to learn for real,” she told ABC. “I love animals, and I’ve been really enjoying a challenge learning something new.”

From all those ribbons, it looks like those lessons paid off!

6. She Collects Salt And Pepper Shakers

According to an interview in Country Living Magazine, she has a very large collection of salt and pepper shakers.

“I love all things vintage, and I have a growing collection of salt-and-pepper shakers,” she said. “I have about 50 sets right now, and it’s getting out of control. My favorite—a ’55 Chevy with an Airstream—came from a fan.”

7. One Of Her Biggest Musical Heroes Isn’t A Country Singer

We know that Miranda lists Loretta Lynn and Merle Haggard as her musical icons, but there’s one more singer that she idolizes and it may surprise you!

“I’m obsessed with Beyoncé,” Lambert admitted. “I have every Beyoncé record, I have Destiny’s Child, I’ve seen her [five] times in concert, so I’m just a giant fan. I actually got to meet her briefly at the American Airlines Center last year. I just love her, and I will always buy every record she makes, but I still love B’Day the most.”

Watch her 2014 CMA Fest entrance to the tune of Beyoncé’s “Who Run The World (Girls)” in the video above.