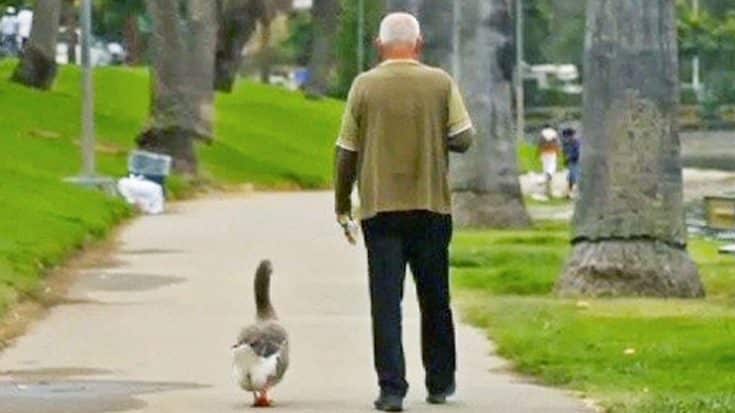 When people retire, they look forward to having the time to make new friends. But when Dominic Ehrler retired, he had no idea that his new friend would be a goose.

After Dominic retired from his job as a salesman, he spent a lot of time at the local park. That’s where he met his friend, Mario the goose.

Even though Dominic never fed or coaxed Mario, the goose took an instant liking to him. Mario would follow Dominic all around the park, never leaving his side. It wasn’t long before Dominic started to feel a connection to his new feathered friend as well.

“He knows I’m his friend,” he said. “When you realize that an animal has this unconditional love for you, what do you do?”

The strength of Dominic and Mario’s bond was also evident to other park-goers, with one observer saying that they loved watching the two of them together.

“They walk around the park together like they’re in love. It’s wonderful.”

Mario became so attached to Dominic that it became increasingly difficult for him to leave the park. When Dominic would try to leave on his scooter, Mario would fly after him, and Dominic had no choice but to return to the park and wait on Mario to fall asleep so he could leave.

After Mario’s fame grew, the decision was made to move him to the Los Angeles zoo where he could be kept safe. It also kept Mario from flying down the street after Dominic, and changed the pair’s routine.

In the three years since Mario has been in the zoo, Dominic has rarely missed a morning visit with his friend. He stops by and feeds him treats like lettuce, and Mario always flaps his wings and makes happy noises as soon as Dominic comes into sight.

Dominic isn’t quite sure how he ended up becoming friends with a goose, especially considering his past.

“I quit eating poultry…I used to think birds were dumb. This has changed all that,” Dominic said.

In addition, Dominic confessed that before he retired, he sold…get this…rotisseries for rotisserie chickens!

Dominic can’t help but laugh now as he thinks about his former job in light of his friendship with Mario, “If that’s my atonement, or whatever it is, that’s what I’m thinking.”

Watch the video below to learn more about Dominic and Mario’s beautiful friendship!