15 Fried Foods That Will SHOCK You! 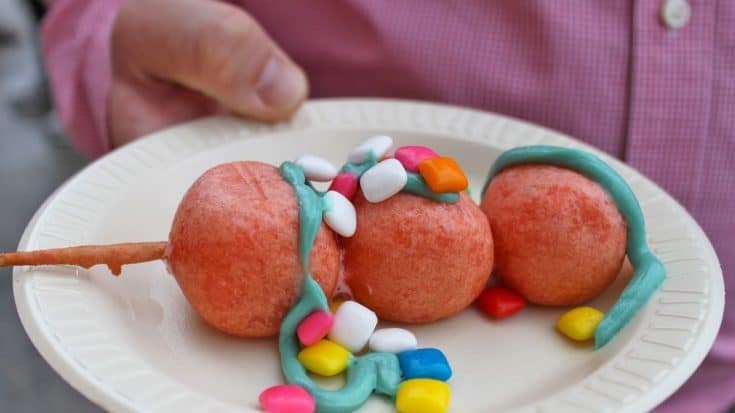 Fried foods are popular everywhere, but there are some unique twists on frying you probably haven’t seen or heard of yet!

1. Fried Bubble Gum (Texas)
A complete dessert of bubblegum-flavored marshmallows dipped in batter, fried, and covered with icing and sugar. Usually with an added bit of Chiclets for color and flavor. 2. Fried Scorpions (Arizona)
An American twist on a Chinese delicacy. Battered and fried for some crunchy snacks. 3. Fried Alligator On A Stick (Illinois)
A favorite among fair-goers, the meat is deep-fried and skewered. According to locals, it tastes like pork. 4. Fried Kool-Aid (California)
It’s like a donut-hole made from flour, water, and Kool-Aid. Delicious? 6. Fried Tarantula (Cambodia)
A regional delicacy in this country, these leggy treats are so popular they are even served in vending machines! The spiders are first frozen, then dipped into a tempura batter and deep-fried. 8. Fried Butter (Wisconsin/Iowa)
As described. Take one stick, wrap it in batter, and toss in a fryer. Served up hot with a variety of dipping sauces. 9. Deep Fried Coca-Cola (Texas)
Starting with frozen Coca-Cola-flavored batter, tossed in a fryer, and delivered to your table with whipped cream and cinnamon sugar. 11. Fried Flowers (Thailand)
Traditionally, orchids, roses, and bougainvillea are dipped in a light egg batter and fried. The taste is said to be very similar to squash. 12. Fried Pie (Georgia)
Peach pies are most common, but you can usually find a variety of flavors. Instead of baked, these bites are sealed in their crust and dropped in hot oil. 13. Deep Fried Macaroni-and-Cheese (Midwest America)
Cold mac ‘n cheese is rolled into lumps and lightly battered. After its dunk in a hot fryer, you get gooey savory cheese balls. 14. Fried Salad (Texas)
Take a salad, wrap it in a spinach tortilla, and fry it up. Serve with ranch. That’s a hot salad. What’s your favorite food to fry!?