By Manly Bryant on October 15, 2015
Advertisement 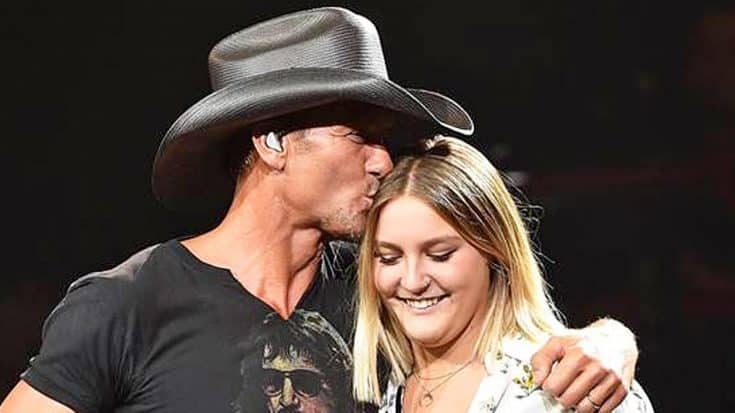 When Tim McGraw started putting together his latest album, Damn Country Music there was only one singer he was nervous about asking to work with.

What could possibly making this Grammy award winner with 36 number one hits nervous? His 18-year-old daughter, Gracie McGraw. She is featured on the album’s first song “Here Tonight”, a duet that she sang for the first time on stage with her famous father in August 2015.

Tim spoke on his hesitation about asking his daughter to sing with The Tennessean.

“When we were working on this song, I just kept hearing her voice on ‘Here Tonight,’ ” he said. “I was afraid to ask her because she’s way cooler than I am, and I was scared to death that she would say no.”

Even wife Faith Hill wasn’t sure Gracie would agree to her father’s plea. When McGraw mentioned it to her she simply replied, “You’re on your own. If you’re brave enough to ask her, you’ve got to take what comes.”

Much to their surprise, Gracie was more than happy to sing on the track. She rode with her dad to producer Byron Gallimore’s studio to record the song, and came prepared. Gracie had memorized all the words, but her dad had one more surprise request – he wanted her to laugh at the end of the track. Reminiscent of McGraw’s 2007 “Last Dollar (Fly Away)”, featuring all three of his daughters. So sweet!

Watch Gracie’s live Nashville duet with her dad below, along with McGraw’s latest music video for “Damn Country Music”.