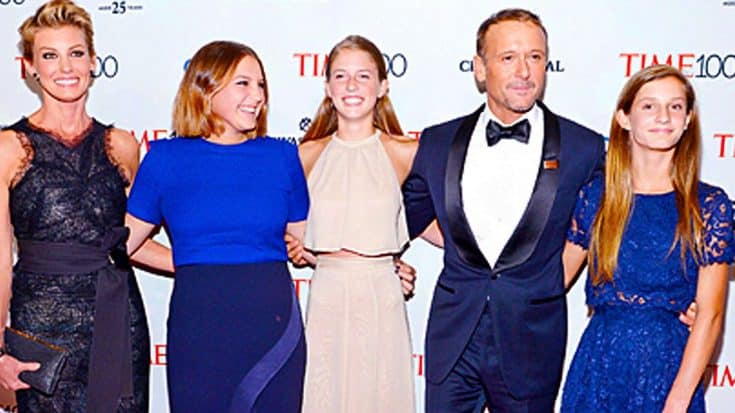 Tim McGraw is a singer, songwriter, actor, and all-around superstar. But to him, his most important role is being a good father.

According to an article posted by CMT, even when the girls were young, McGraw made it his mission to help raise them to be “confident young women.”

Now that McGraw’s daughters are all teenagers, and oldest daughter Gracie has gone off to college, he knows that he succeed in his mission to help them be confident in themselves.

But McGraw is sure to acknowledge the important role that Hill played in raising their daughters. During an interview with Oprah’s Master Class in 2014, McGraw gets emotional as he talks about how good Hill is to their girls:

Besides having a devoted mother and father, McGraw’s daughters have another positive role model to look up to in their aunt, McGraw’s sister Cari Velardo.

Velardo shared an inspirational quote to Facebook that urged parents with daughters to encourage their girls to be the best that they can be. The quote read as follows:

“Don’t let your daughters worry about fitting into a glass slipper. Let ‘em worry about breakin’ a glass ceiling.”

The quote really struck a chord with McGraw, who hopes his girls will go on to live lives that are greater than any fairytale.

McGraw’s daughter Gracie has already shown that she is capable of breaking glass ceilings, joining her father as his duet partner on his new song “Here Tonight,” which will be released on McGraw’s upcoming album Damn Country Music.

Watch McGraw and Gracie’s live performance of “Here Tonight” in the video below.