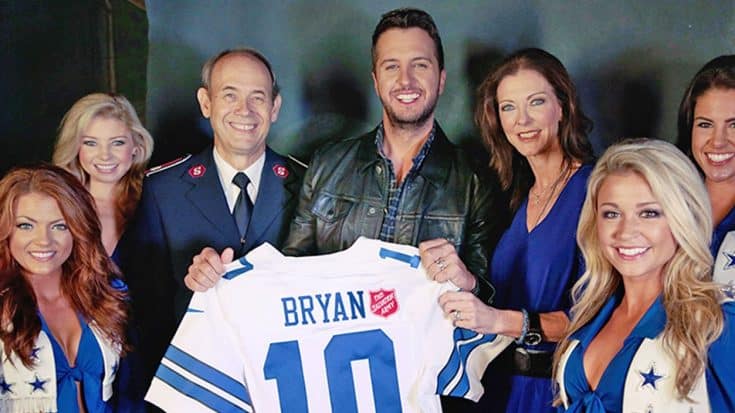 Selling almost eight million albums, and 30 million digital tracks, Luke Bryan has been at the forefront of country music headlines for almost a decade.

Now, Luke is making headlines in another way. Recently he has been dominating with gestures of kindness and working toward helping charities.

Today, Luke became an honorary member of the Dallas Cowboys and teamed up with the Salvation Army for their Red Kettle Campaign this holiday season. Officially kicking off the 125-year-old fundraising campaign, Luke will be the halftime performer during the traditional Cowboy’s Thanksgiving Day game against the Carolina Panthers.

The Cowboys executive vice president, Charlotte Jones Anderson produces the halftime show annually and went on to talk about how she feels having Luke as their opening performer this year:

“Luke Bryan is one of the biggest names in country music, but he has an incredibly humble spirit and is always searching for ways to give back and help others,” she said. “For us, it was a perfect fit for what the Red Kettle Kickoff represents for our partnership with The Salvation Army.”

Supporters are invited to take to social media to share their reasons for donating to this wonderful campaign using #RedKettleReason, and Luke even shared his! When this incredible campaign launches on Thanksgiving Day, thousands of Salvation Army volunteers and officers alike will take up posts outside of many retail locations ringing bells near their Red Kettle to help Americans during times of need.

Check out the Dallas Cowboys’ announcement for the full story.