CLASSIC: Doc Watson Brags About His Beautiful Wife, Always Knew She Was A ‘Sweetheart’ 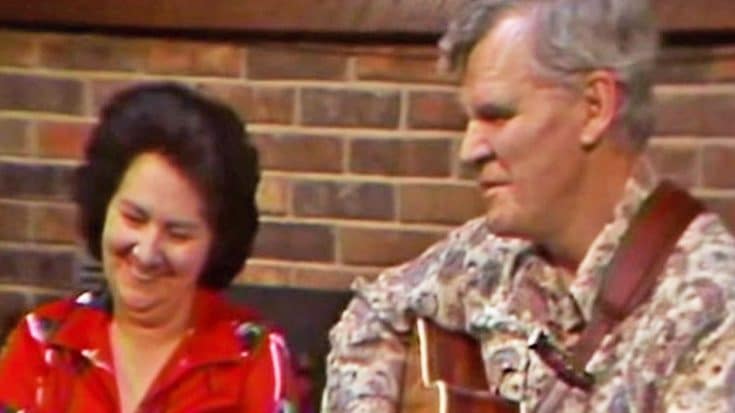 Doc Watson and his wife Rosa Lee Carlton were married for 65 years, but as the couple reveals in a 1984-85 interview, they knew each other long before that.

Rosa Lee’s father was the famous fiddler Gaither Carlton, and Doc would often stop by the house to play music with him. She says that she was probably about ten when she met Doc for the first time.

Since Doc was 18 when he met Rosa Lee for the first time, he didn’t have any romantic feelings toward her yet. Still, Doc knew that there was something special about her, “I thought about her as a sweetheart the first time I ever seen her.”

Rosa Lee says that once she turned 13 she saw a lot more of Doc, who came over to her house to play music with her dad even more often than before.

Once Rosa Lee grew up into a young woman, Doc says he finally started to take notice of how beautiful she was.

“Somebody might as well hit me with a brick,” he says, smiling over at Rosa Lee.

Doc and Rosa Lee were married in 1947 and had two children together, Eddy Merle and Nancy Ellen Watson.

Eddy joins his parents for their interview in order to show of the family’s musical talent. The trio performs a version of “Bring Back My Boy, My Ramblin’ Boy,” a song made famous by folk singer Tom Paxton.

When Doc passed away in May of 2012, he left Rosa Lee alone for the first time in 65 years. Rosa Lee, who had suffered a stroke prior to Doc’s death, passed away just five months later.

Watch the couple’s adorable interview about how they fell in love in the video below.

With a love story that spans across so many decades, it’s no wonder that Doc and Rosa Lee adored each other so much.