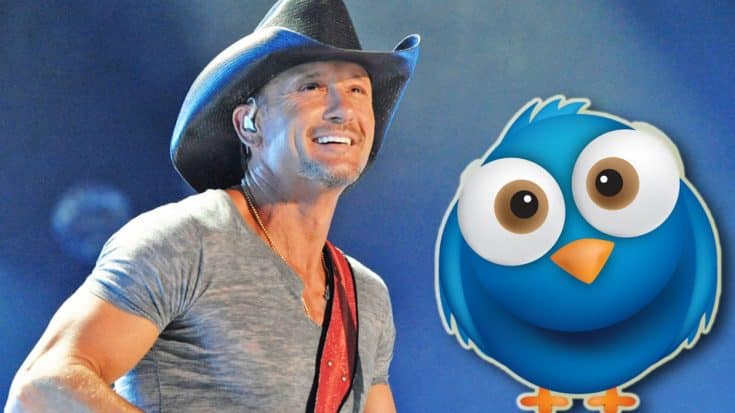 These days it’s easy to reach out to country superstars.

Thanks to Twitter, Facebook and Instagram (just to name a few!), we can talk directly to country legends in hopes that they will see our message and respond.

And let’s be honest, if you had the chance to talk to your favorite country star, why wouldn’t you!?

But sometimes, things can get a little out of hand. One moment you’re Tweeting them your favorite song and next thing you know you’re asking them to marry you.

Or maybe that just happens to Tim McGraw…

Below are actual Tweets from actual Tim fans that y’all have to see to believe.

Fans have all kinds of things to say to the country superstar. From restaurant advice to marriage proposals, Tim’s heard it all.

Check out 15 strange Tweets from fans to @TheTimMcGraw below!

@TheTimMcGraw – here’s a chunk of granite mtn here – I should send it huh ? pic.twitter.com/wuvWeGQzCZ

I got a package at work today from Tim McGraw. Unfortunately it wasn’t from @TheTimMcGraw just some guy with the same name. What a bummer.

5. When you don’t have a piece of paper you have to get creative.

Last time @TheTimMcGraw was at the Beacon Theater he signed my arm. #TBT pic.twitter.com/nntkg0dezt

@MeganAnn3x@TheTimMcGraw You’re such a babe, have my kids.

@TheTimMcGraw my mom says your as onry as frog eggs. hahahahahahaha she adores ya

I’m going to prom with @TheTimMcGraw and sweet tea.

9. You never know who you may need in your music video…

@TheTimMcGraw So I can survive on naked and afraid in the swamps lol…if you need a girl for music video in swamp areas let me know!

What do you mean, @TheTimMcGraw is roaming around your halls @stormewarren ?!?! #splain

@TheTimMcGraw Hi again how are you? I was wondering if raffey Cassidy has some social network?

14. And all these people who want to be adopted by Tim…

@TheTimMcGraw will you adopt me? love you and your all white outfit! #AdoptMePlease #TruckYeah

@TheTimMcGraw #AskMcGraw Can you adopt me? Please.

15. And then all of these people who want to marry Tim…

@TheTimMcGraw when can we get married ?

hey tim mcgraw can you please marry me? ok @TheTimMcGraw

Hey @TheTimMcGraw will you marry me?

@TheTimMcGraw please marry me you are the man of my dreams.

And there you have it, some of the strangest Tweets ever sent to Tim McGraw.

It’s worth the try, right? He just might respond to you!