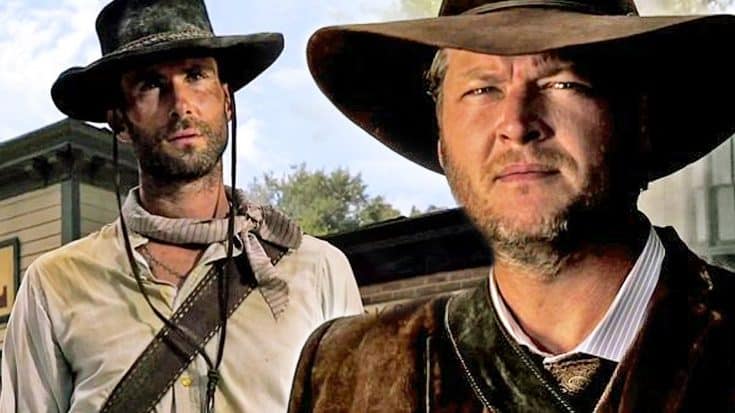 Adam Levine likes to give Blake Shelton a hard time about his country boy roots, but it turns out that Levine has a bit of a country side to him as well.

The Maroon 5 frontman and Voice coach may be known for making pop rock music, but on his down time, he has some surprisingly country pastimes.

A quick search of Levine’s Instagram provides photo evidence that Levine may just be a little bit of a country boy after all.

The first of Levine’s best country boy moments is when he wore a ragged cowboy hat and put on a strong cowboy face. Levine simply captioned the photo “Go ahead…“, and his female fans most certainly did…they loved his new cowboy look.

Levine has photographed himself wearing a cowboy hat more than once. For another photo, Levine put on a long blond wig, a large, white cowboy hat, and a cigarette hanging out of his mouth.

He captioned the photo “and then there’s this guy,” and we can’t help but wonder if he was somehow trying to look like a long-haired Blake Shelton?

And then there's this guy…

Every country boy needs a good dog, and Levine seems to know that. There are several pictures of his adorable pups on his Instagram, but the one that shows off his true country side is when he snuggles up next to one of his beloved pets for a little rest.

But Levine’s best country boy moment by far is when he used the app Dubmash to film himself talking with a Southern twang.

Levine’s wife, model Behati Prinsloo, posted the video to her Instagram, and the result is hilarious!

Maybe now Shelton can tease Levine for trying so hard to be a country boy, since Levine has always enjoyed teasing Shelton in the past!

If you don’t get enough of Levine and Shelton teasing one another on The Voice, watch the video below for more!