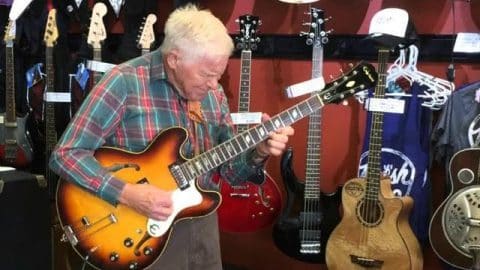 81-year old Bob Wood from Bethpage, Tennessee, is taking the internet by storm once again with a year-old video that was released by a Nashville music store. In the video we see wood pick up an electric guitar at Nashville’s British Audio Service guitar shop and tear into a stunning impromptu performance of Besame Mucho, a Mexican favorite.

Wood’s daughter, Melanie Wood Moody, one of Bob’s nine children, told GuitarPlayer.com last year that her dad was a celebrity in his own right long before this video surfaced. Wood was a regular performer at Jamboree USA in Wheeling, West Virginia, in 1970, and performed there for 10 years. He was crowned Entertainer of the Year by Eastern States Country Music Inc. twice, in 1975 and 1976, and was inducted into the Southern Legends Country Music Hall of Fame in 2007. Wood has also released several albums over the course of his career.