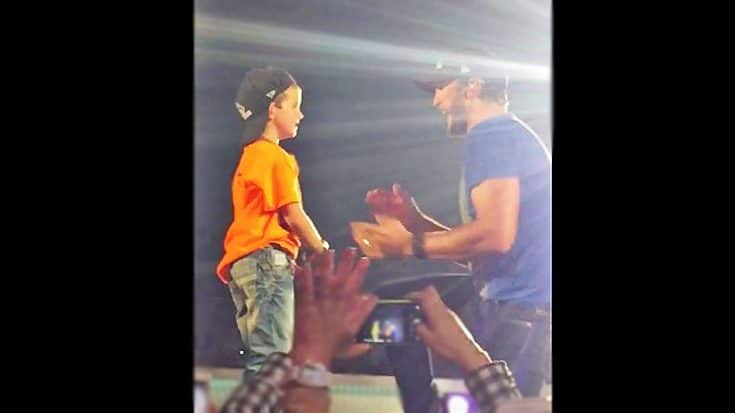 Luke Bryan always enjoys inviting his fans on stage with him, and he really loves it when he can give his younger fans a chance in the spotlight.

During his performance of “Shake It” at a October 2015 concert in San Antonio, Texas, Bryan spots a little boy in the crowd and motions toward his parents to send him up on stage. The crowd passes the little boy down the line until Bryan finally picks him up and puts him down beside him.

The little boy is smiling ear to ear as he looks at Bryan, who offers him a high-five and wiggles side to side, showing him how to “shake it.”

Much to Bryan’s surprise, the little boy mimics his moves, and he laughs as he wraps him up in a big hug.

After that, Bryan turns the little boy’s hat around, and it turns out it’s just like his!

The two pose for a picture, and Bryan autographs his hat before giving him one more high-five and a chest bump.

All the while, the crowd is going wild, cheering for Bryan’s mini-me.

Watch Bryan bring his little lookalike onstage in the video below!

Although Bryan’s Kick The Dust Up tour just wrapped up, we’re sure we’ll get to see many more adorable moments like this when his upcoming Kill The Lights tour starts in February!