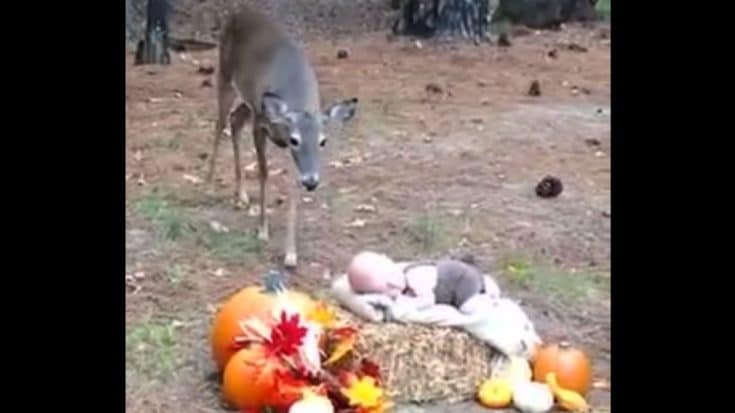 A baby’s first photo shoot is always a magical moment for proud parents.

But for this lucky family, the dreamy fall-themed photo shoot became even more magical when a very special (and fitting) guest joined.

During a routine photo shoot of one-month-old baby Connor, photographer Megan Rion captured a once in a lifetime moment when a friendly and peaceful deer named Maggie joined the photo at Louisiana’s Sam Houston Jones State Park.

Not trying to steal the spotlight, Maggie stood behind the sleepy baby just long enough for Megan to capture the perfect picture!

Our day with Maggie and baby Conner yesterday 🙂

Posted by Imagine That Photography by Megan Rion on Wednesday, October 21, 2015

We had the set up for baby Conner all fixed and we were trying to console him and get him into position while Maggie just strolled up behind us. The mom of Conner was in awe. Awe at the deer, how she showed up so peacefully, awe at the way we posed her baby, and awe at the photographs we were able to take as they were a surprise for her husband.

Apparently this isn’t Maggie’s first appearance in the park… she’s a local celebrity!

Maggie was rescued when she was young, and dropped off in the state park where she has lived ever since. She’s been known to photobomb Megan’s photos in the past, so often that the photographer has dedicated a Facebook album to Maggie sightings. Maggie is definitely not camera shy!

The family will never forget this amazing moment, and we’re so happy Megan was able to capture it!

Check out the quick video below to see Maggie and baby Connor’s photo shoot!