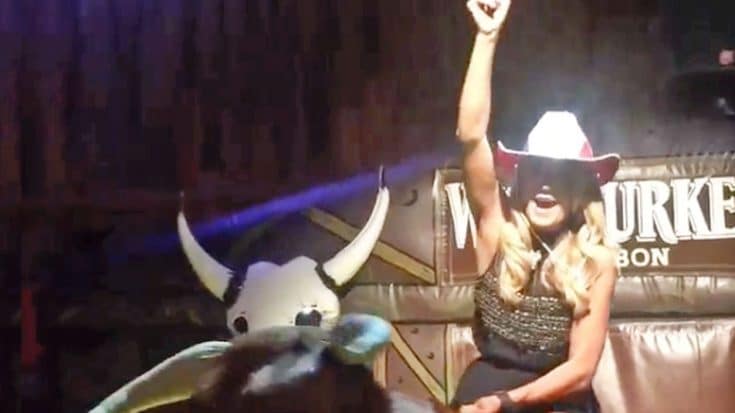 Between co-hosting the 2015 CMAs, and giving a jaw-dropping performance of her new song, “Smoke Break“, Underwood definitely deserved to let loose after the show.

And that’s exactly what she did!

Once the CMAs concluded, and after a quick outfit change, the country superstar took on the town! And somewhere along the way, found herself a bull to ride.

A cowgirl-dressed Carrie posted an adorable video clip to her Instagram page of her riding a mechanical bull, with the caption, “Yee Haw!“

Underwood looks great in her elegant black outfit, cowboy hat, and little toy gun. All she’s missing are the boots!

Most importantly, she’s quite the bull rider! You can’t take the Oklahoma out of this girl!

Underwood also posted a photo of her wearing a mustache to her Twitter page, saying, “I mustache you another question: do you like my hat? Yes?!?! Woo hoo!!!”

I mustache you another question: do you like my hat? Yes?!?! Woo hooo!!! pic.twitter.com/PwPKYFfg3W

Looks like someone had a great night! You deserve it Carrie!