Pup Wakes Up Mid-Snooze To Sing His Favorite Song, ‘Let It Go’ 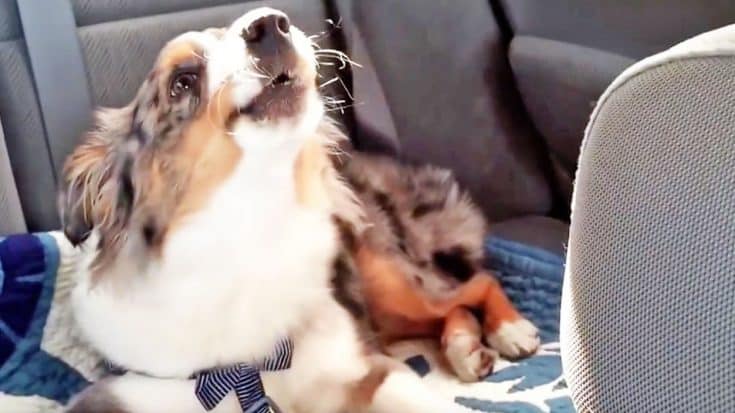 We all have our favorite song.

And -let’s just admit it- when it comes on, you know you’re the first one to sing along.

Well, Oakley the Australian shepherd has a favorite song too, and nothing can stop this puppy from enjoying his favorite tune, not even a deep sleep.

Oakley a serious love for Disney’s mega-hit, Frozen, and he especially loves the movie’s theme song, “Let It Go“.

While taking a nap in the backseat of the car, Oakley seems perfectly content snoozing through today’s pop hits, but when his mom changes the station, it doesn’t take Oakley very long to figure out which song is on… it’s “Let It Go“!

The moment the song began playing on the speakers, Oakley’s ears perked up and he was instantly awake.

He was so excited that he even sang along to the song’s lyrics! I guess people aren’t the only ones who enjoy a little music…

Since the super successful movie’s release in 2013 we’ve kind of moved on, but this pup just could NOT ‘let it go’.

Have you ever seen a dog sing like this before?

Check out the cute moment below.