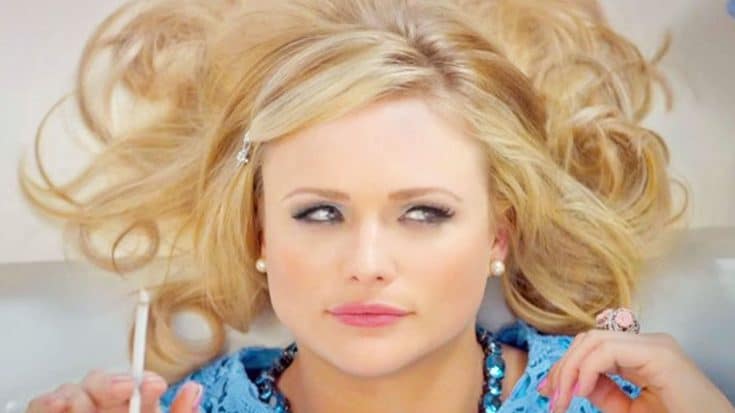 Miranda Lambert has experienced incredible success over the course of her 12 year career.

The self-proclaimed “rebel child” got her start as a finalist on the 2003 season of the reality competition show, Nashville Star. Lambert got an early indication of how successful her career was going to be when first album, Kerosene, was released in 2005, and produced four top 40 singles.

Since then, Lambert has gone on to have many more hit singles, earned numerous awards, and is now the most awarded female in CMA history, with a total of 12 CMA‘s to her name.

In honor of country’s “rebel child” we’ve gathered up some of Lambert’s best videos, and the decision wasn’t easy!

Released in 2005 off of Lambert’s debut album of the same title, Kerosene became Lambert’s first Top 20 country hit, peaking at the 17th spot on the charts.

The music video for the song features Lambert spilling a trail of kerosene that she eventually lights on fire, burning down her cheating boyfriend’s house. The video was so popular that it reached the top spot on the CMT Top Twenty Countdown during the week of March 2, 2006.

In 2010, Lambert released “The House That Built Me” as the third single off of her album Revolution. To this date, the song remains the fastest-selling single of her career, and it became her first number one hit.

The video for the song is one of Lambert’s most emotional music videos, as her tour bus pulls up to her childhood home and she walks around inside. But what makes the video truly special is the flashbacks to some of Lambert’s personal family videos.

Released in 2013 as the fourth single from her album, Four The Record, “Mama’s Broken Heart” was Lambert’s first major crossover hit, peaking at the 20th spot on the Billboard Hot 100 chart.

The music video was released just a few months after the single made its debut, and features an eccentric and heartbroken Lambert running around her house, singing about trying to keep it together even when she’s falling apart. Miranda’s acting in the video is just the perfect level of over-the-top, and she really sells the song in it as a result.

We hope Lambert continues to experience the success that has graced her career so far, and more importantly, that she keeps making great music videos!