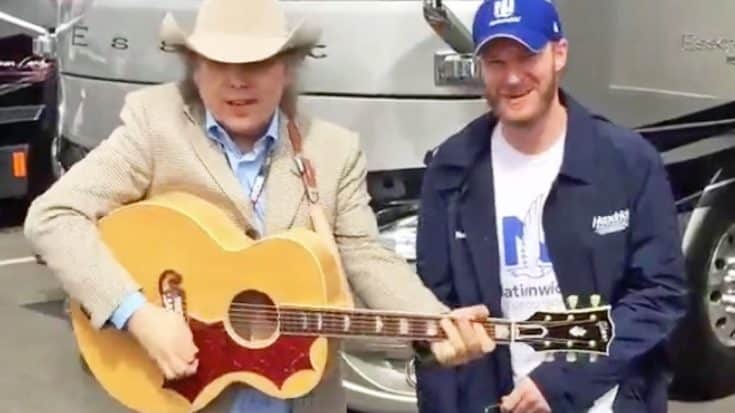 Who would think that Dale Earnhardt Jr. would be a country singer?

Well, for Dwight Yoakam he was the first choice for a duet partner at the NASCAR track and together, this unlikely musical duo came together for a performance you’ve got to see to believe!

Stopping by the famous Auto Club Speedway in Fontana, California, country music legend Dwight Yoakam stumbled upon NASCAR’s most popular driver, Dale Earnhardt Jr. before he was about to hit the track for the 2015 Auto Club 400 race.

Dale Jr. raced inside the top 10 throughout the day at Auto Club Speedway on his way to a sixth-place finish.Race Report: http://www.dalejr.com/media/2015/03/22/earnhardt-races-to-6th-place-finish-in-fontana

Yoakam, who served as the honorary starter of the event, figured the two of them should sit down and sing a little ditty for fans!

Dale Jr. and Yoakam combined their talents for a rendition of his 1993 hit song “Fast As You” – which was the perfect choice for this newfound duo!

Surprisingly, Dale Jr. gets his musical talents from his father – who once cut a track for an entire record of country music sung by famous NASCAR drivers.

If you’ve ever wanted to hear Dale Jr. sing a country tune – especially with a legend like Dwight Yoakam, you are surely in for a treat!

Check out their brief duet of “Fast As You” below.