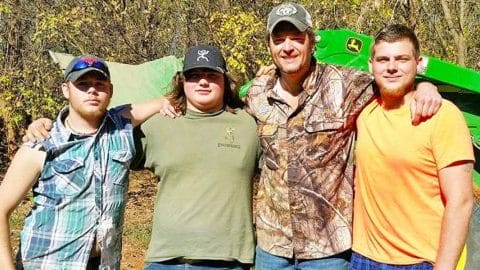 Blake Shelton to the rescue!

One Oklahoma resident named Bryar Blanton said that his buddies were checking out an area around the Washita River last week, when some of them slid into a giant mud hole and found themselves stuck.

Blanton and another one of his friends went to look for help, but after two hours they still hadn’t found anyone.

Finally, a certain famous Oklahoma boy came down the road, and to the rescue.

“Me and Adrian started walking down the road [looking for help] and [that’s when] Blake and his dog, Betty, stopped and picked us up in his truck,” Blanton says in an interview with ET.

Blanton and his friend couldn’t believe that Shelton had really stopped by to help them.

“We went back to the river [where my friends were stuck] and he tried to get them out with his truck,” he says. “He couldn’t do it, so he said he would be back in 15 minutes with his tractor.“ Finally, Shelton helped Blanton’s friends out of the mudhole, and besides thanking him a thousand times over, the buddies asked if they could have a few pictures with him, which Shelton was more than willing to take. Blanton says that after the rescue, Shelton hung around for a little while before he went off on his way.

“After he helped us out, he talked to us for a minute then said he had to go,” he says. “He had his bow with him and he talked to us about hunting. He’s an all-around nice, caring guy.“ The day after the incident, Blanton took to Twitter to thank Shelton once again, to which he responded with his typical humor.

This isn’t the first time Shelton has rescued another one of his fellow Oklahoma residents. Over the summer, Shelton helped a local man named Roho Hartman pull his truck off of a flooded roadway, and gave him a ride home.

Watch the ET video about Shelton’s most recent rescue mission below.

It seems that the people of Oklahoma can rest easy knowing that if they get into trouble, Shelton can come to their rescue!