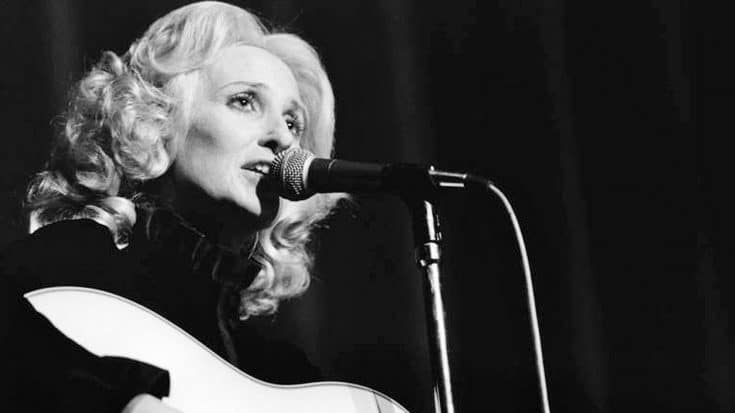 Over the course of her 32 year career, Tammy Wynette generated dozens of chart-topping hits, earning herself the title “The First Lady of Country Music.”

In addition to her hit solo songs such as “D-I-V-O-R-C-E” and “I Don’t Want To Play House,” many of Wynette’s duets with George Jones were also big hits, including “Golden Ring” and “The Ceremony.”

But out of all of Wynette’s hit songs, none is more recognizable than her 1968 single “Stand By Your Man.”

“Stand By Your Man” was co-written by Wynette and Billy Sherrill, and reached the number one spot on the U.S. Billboard Hot Country Singles chart, a spot which it held for three weeks straight. The song was also a big crossover hit, peaking at the 11th spot on the  U.S. Billboard Hot Adult Contemporary Tracks chart.

CMT later went on to name “Stand By Your Man” as the all-time best country song on their Top 100 Country Music Songs list.

It was “Stand By Your Man” that really defined Wynette’s career, and as a result, Wynette has been credited for helping define women’s roles in country music. Today, “Stand By Your Man” is one of the most covered country songs, and in honor of Wynette, we’ve included some of our favorite covers below!

Dolly Parton, Patty Loveless, The Judds, and Martina McBride Pay Tribute To Wynette At The CMA‘s

As lovely as these ladies’ covers are, there’s no one that can sing “Stand By Your Man” quite like Wynette. Thanks to “Stand By Your Man” and the rest of her music, Wynette helped pave the way for many of the ladies who went on to cover her hit song.

You can watch Wynette’s performance of her signature song in the video below.