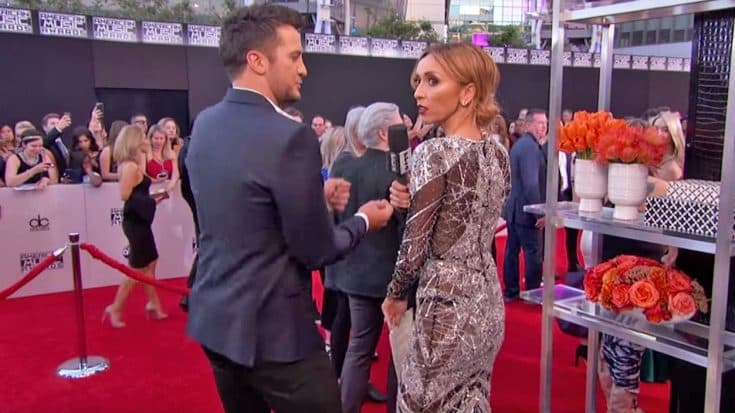 Luke Bryan is known for his hip-shaking moves on an off stage!

While strutting his stuff on the American Music Awards red carpet, Luke talked with E! Entertainment’s Giuliana Rancic about his excitement for the AMA’s, Taylor Swift, and some of his favorite fashion designers. But that’s not all. Luke also gave Giuliana her very own private dance lesson.

As the queen of Fashion Police, there is no surprise Giuliana wanted to talk about Luke’s fashion sense. She complimented his style, to which he dished his favorites – Alexander McQueen and Tom Ford. Fancy! But even though he enjoys getting dressed up for special events, this country boy also enjoys “bummin’ out” as he calls it, in old blue jeans.

Luke admitted that his signature ‘booty shake’ all began when he was trying to distract the audience from how bad his first band was. Hilarious tactic!

“I don’t want to throw my band under the bus, we were okay. We had to throw everything at them, and give them some moves.”

Luke then proceeded to teach Giuliana how to do the ‘booty shake’ right there on the red carpet. This has to be one of the most fun interviews Giuliana has ever done!

Although he wasn’t nominated for 6 awards like popular crossover artist, Taylor Swift, Luke walked away with the AMA for Favorite Male Artist. He is hard not to love!