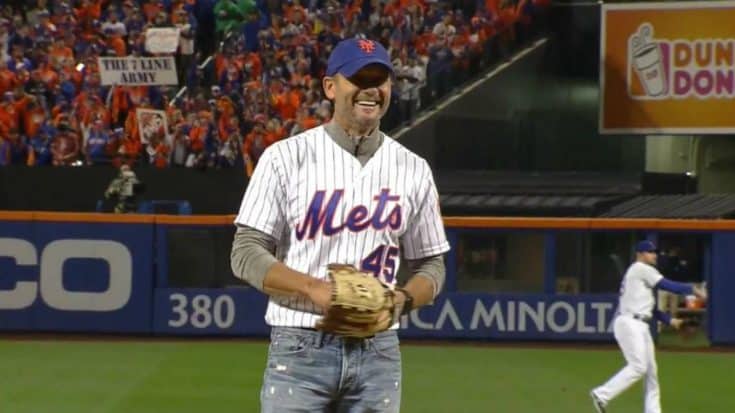 In October, country legend Tim McGraw was given the opportunity to honor his late father, Tug McGraw, in the most incredible way.

Tim was asked to throw the first pitch at Game Four of the 2015 World Series in the Mets vs. Kansas City Royals game.

Tim’s father was the star pitcher for the New York Mets back in the 1960s, winning a championship game in 1969.

It came as no surprise that the Grammy-winning country superstar was asked to throw the first pitch at the Mets game. But, despite his baseball background, Tim admitted he was a little nervous to make the first throw, telling CBS he “couldn’t walk out there and make a bad throw.“

And in an interview with Rolling Stone Country, Tim even confessed that he had a little help from a fellow country star…. his wife, Faith Hill!

Once I found out it certainly made me dial into baseball even more. I haven’t warmed up tonight but yesterday I threw with my wife [the country artist Faith Hill] in my back yard. There’s some nerves. Just gotta get it over home plate.

Even Tim needed a little practice, thankfully Faith was there to help!

But apparently the country star thought her husband could have used a little more practice! Tim told ET that after the nerve-racking throw, his wife told him,

She said I did alright. She said I still got a little bit of arm left.

We still think you did great, and we’re sure your father would be so proud!

Check out the video below to see Tim’s emotional World Series pitch!