By Manly Bryant on April 8, 2017
Advertisement 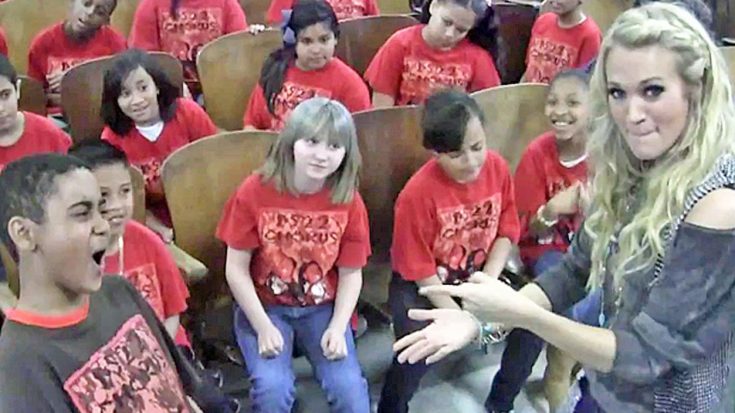 Not many 10 year olds get to sing a cappella with a super star.

What a lucky class! The PS22 Chorus in Staten Island, New York is a talented group of 5th graders who have some serious pipes! They have gained national attention for their larger than life performances of Adele, Ingrid Michaelson, Katy Perry and back in 2012, even country music sweetheart, Carrie Underwood.

Led by their teacher and talented piano player, Gregg Breinberg the chorus members gathered in the school auditorium to welcome Underwood and share in a few songs. In this particular video the choir accompanies Underwood on her song “So Small,” and we can almost guarantee goose bumps.

Underwood released “So Small” in 2007 off of her second studio album, Carnival Ride. She co-wrote the single with songwriters, Luke Laird and Hillary Lindsey. It was the first single that Underwood took credit for co-writing, and its beautifully composed lyrics caused the song to reach number one on the Billboard Hot Country Singles chart.

The PS22 Chorus has been featured twice on Oprah, Nightline, Good Morning America, Sesame Street, and, perhaps most notably, at the 2011 Academy Awards, closing the show with their stunning rendition of “Somewhere of Over The Rainbow.” Is there anything these kids can’t sing?

The video not only shows the group’s talent but also their heart. One student told Underwood that her music has helped her through some tough times, and began to cry. The “Smoke Break” singer rushed to her side and gave the young girl a hug. Music really is therapy, and it doesn’t matter how old you are!

Watch the heartwarming, goose bump-inducing performance of “So Small” below.