Randy Travis Cover Brings Crowd To Their Feet On ‘The Voice’ 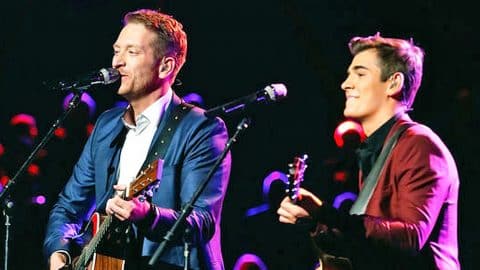 Tuesday night’s (Dec. 15)  finale show for The Voice was filled with incredible performances, but one that truly stood out was a duet between Team Blake finalist Barrett Baber and his former teammate, Zach Seabaugh.

Each finalist got the chance to perform a “bring back” song where they selected past contestants to share the stage with them one last time. For Baber’s performance, it was a no-brainer for him to bring Seabaugh back, since the two of them had developed a close connection up until Seabaugh’s elimination during the semi-finals.

For their performance, Baber and Seabaugh chose to sing Randy Travis‘ 1987 number one hit, “Forever and Ever Amen.” Baber said he felt like the song was a good choice for him and Seabaugh because it shows how well their voices can blend together.

It seems that the Voice crowd agreed with Baber, because they gave the duo a standing ovation just a few seconds into the song, and remained on their feet the entire time.

Baber and Seabaugh take turns exchanging verses during the performance, giving each of them the chance to show off their individual talents. The two of them strum along on their guitars as they sing, finally blending their voices together when they come to the chorus. Baber was right, their voices really do sound great together!

During the performance, Baber and Seabaugh have so much fun that they can’t help but bounce around a little as they sing, while the audience claps along to the beat. The two of them often glance over at one another and smile, making it clear that they’re having a blast performing together.

By the end of the song, anyone who wasn’t already on their feet gave the duo a standing ovation, including all four of the coaches.

You can watch Baber and Seabaugh’s amazing, live performance of Randy Travis’ “Forever and Ever Amen” in the video below.

We can’t wait to see more from both Baber and Seabaugh in the future!

"Forever and Ever Amen"

Barrett Baber and Zach Seabaugh perform the Randy Travis classic "Forever and Ever Amen" on the #VoiceFinale.What did you think?!? Pretty awesome!