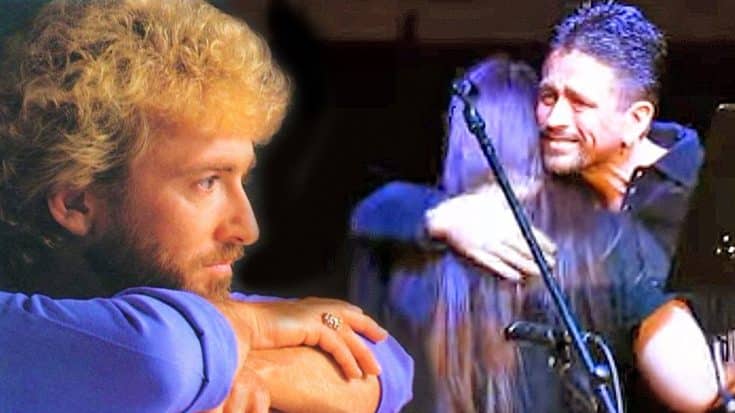 In the middle of the ‘Whitley Country Christmas Concert‘, Keith Whitley’s nephew, Michael Whitley, brought his longtime girlfriend on stage, and left the audience in tears.

Michael Whitley took a long pause after a singing, and began talking:

“I want to introduce y’all to somebody. Johnda come up here! Somebody that’s very important to me, Lord I’m a little bit nervous. I’ve known this girl since I was a little, bitty kid, she grew up actually just right down the road from me. I’ve known her all my life, and we’ve been dating for awhile now. I’m kind of at a loss for words, but I want to sing this song to you.“

After the sweet, yet shaky introduction, Michael Whitley began serenading Johnda with George Strait’s, “That’s Where I Wanna Take Our Love (And Settle Down)“.

Michael seemed nervous, singing to Johnda, and keeping eye-contact throughout the entire performance.

After Michael finished the song, he gave Johnda a huge kiss, and smiled sweetly into her eyes.

Michael reached into his pocket, and confessed through tears, “You make me the happiest man alive. Marry me.”

Johnda said yes, and pulled Michael in for another kiss and huge embrace!

This video shows Michael Whitley vulnerable, in tears, and nervous to ask the love of his life the most important question ever, and it’s absolutely touching.

Keith Whitley would be so happy, and is most likely looking down from Heaven with a big smile on his face.

Congratulations to the newly engaged couple! May Michael and Johnda have many happy years together!