Grandmas Play Drinking Game For First Time? What Happens Next Is HILARIOUS!

By Jennifer Pernicano on January 5, 2016
Advertisement 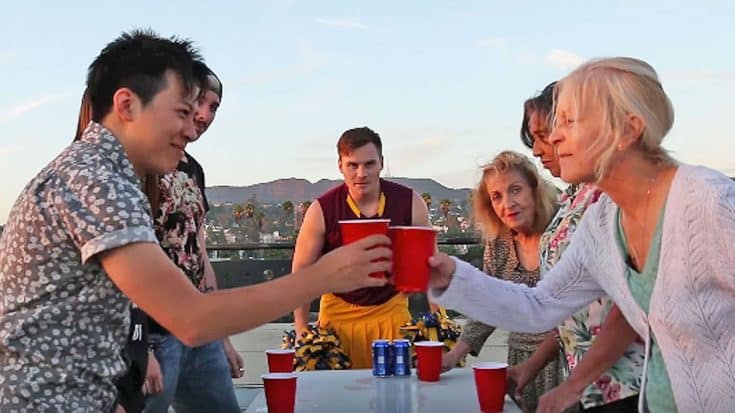 In this video, Grandmas try the game “Flip Cup” for the first time and it is absolutely amazing!

When the three Grandmas are asked if they know what Flip Cup is, one is brutally honest and says, “I have never heard of Flip Cup.”

One tries to guess how the game is played.  “You turn the cup over and you have dice in there and then you pull it back?” she asks. Very wrong.

Will, a Flip Cup expert, explains to the Grandmas the rules of the game.

“We open our beer and we pour about a quarter of the cup full, drink our beer, line our cup up and try to flip it onto the opposite side. Once that lands, the next person in line goes.”

Will informs the Grandmas that he is bringing in three people who have never played Flip Cup to play a game against them. “Trash talking is essential,” he says.

Just watching the Grandmas chug beer is hilarious enough, but adding in the competitive aspect takes the hilarity to another level!

Watching these Grandma’s play against three twenty-somethings is priceless. One grandma says, “In your face!” before any drinking even started!

The Grandmas took the lead early, but the twenty-somethings were still in the game! It all game down to the last cup and it was a nail-biter!

Watch the video below to see if the Grandmas won their first ever Flip Cup game!