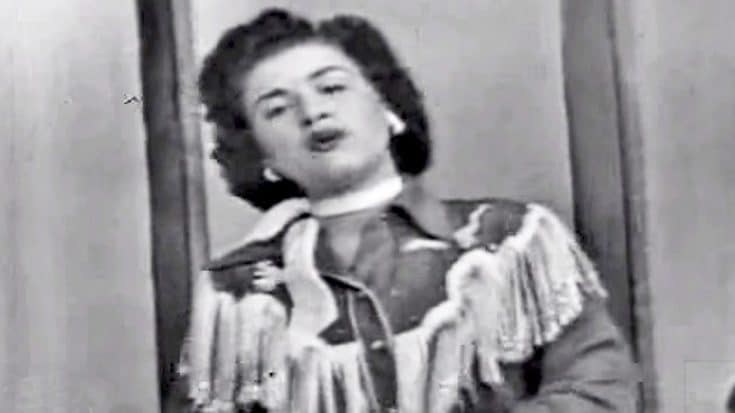 Patsy Cline started her career performing in nightclubs, eventually working her way up to the Grand Ole Opry, and then country superstardom.

After spending several years performing on local radio stations, Cline generated a decent-sized following. She managed to catch the attention of fellow country singer Jimmy Dean, who made her a regular on his radio show Town and Country Jamboree.

Cline recorded her first EP collection in 1955, which included the song, “A Church, A Courtroom, and Then Goodbye.” A year later on January 7, 1956, Cline was given the chance to perform the song during an appearance at The Grand Ole Opry.

Finally, thanks to the Opry, Cline delivered her first televised performance. Little Jimmy Dickens and Ernest Tubb introduced Cline, who was wearing one of her signature western-themed outfits.

Tubb had  a lot of lovely things to say about Cline before she performed, saying “I think you should give the folks a sample of your fine singing I’ve been talking so much about.”

Cline was glad to do just that, looking at Tubb as she sang the first part of the song. She then got up and walked over to Dickens, taking some time to sing to him as well. By the end of the song she made her way back over to Tubb, and the crowd erupted with applause as soon as she finished the last note.

Almost four years to the date after her first televised Opry appearance, on January 9, 1960, one of Cline’s biggest dreams came true when she was asked to become a member of the cast.

Cline was the first person to request to be part of the Opry cast and have that request granted. The Opry made a good decision in choosing Cline, since she later went on to become one of its biggest stars before she passed away in 1963.

You can watch Cline’s first televised Opry appearance in the video below, in which she sings one of her first songs, “A Church, A Courtroom, and Then Goodbye.”

If Cline was alive today, she would have been a member of the Opry for 56 years. She is dearly missed.