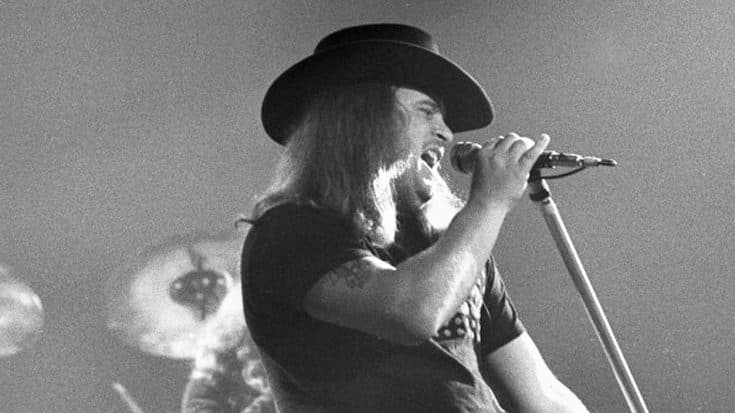 It isn’t everyday we see video footage of Ronnie Van Zant. His time with Lynyrd Skynyrd was short lived but legendary. As the original front man, Ronnie will always remain a integral piece of Lynyrd Skynyrd history.

In videos like this, we get a glimpse into Lynyrd Skynyrd’s past. An iconic past that many of us never got a chance to witness first-hand. Ronnie leading the charge, singing one of the songs that gave them the recognition they deserved at the time.

While performing at a Sounds of the South press party, Lynyrd Skynyrd played “Working For MCA” in front of a crowd full of the record company veterans and industry experts. It is no wonder they turned a few heads! Just months later, they opened for The Who, and were on the road to success.

“Working For MCA” was released on Lynyrd Skynyrd’s second album, Second Helping. The song caused a lot of buzz in the industry at the time because of it’s honest and in-your-face lyrics. This is why we love Lynyrd Skynyrd!

Watch the rare recording of a live “Working For MCA” performance below! The footage was shot July 13, 1977, just three months before the fatal plane crash that changed it all.

Seven years of hard luck, comin’ down on me
From the Florida border, yea up to Nashville Tennessee
I worked in every joint you can name, mister every honkytonk
Along come Mr Yankee Slicker, sayin’ maybe you’re what I want

9000 dollars, that’s all we could win
But we smiled at the Yankee Slicker with a big ol’ Southern grin
They’re gonna take me out to California gonna make me a superstar
Just pay me all of my money and mister maybe you won’t get a scar

Suckers took my money since I was seventeen
If it ain’t no pencil pusher, it got to be a honkytonk queen
But I’ll sign my contract baby, and I wan’t you people to know
That every penny that I make, I’m gonna see where my money goes