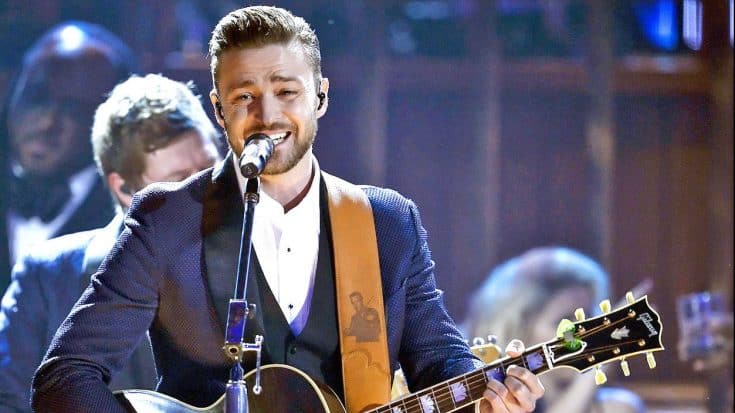 Former NSYNC lead vocalist Justin Timberlake was part of one of the most epic performances to ever hit an awards show stage when he teamed up with Chris Stapleton to perform during the 2015 CMA Awards in November. ‘Tennessee Whiskey’ and ‘Drink You Away’ this past November. The duo stole the show with their renditions of Stapleton’s ‘Tennessee Whiskey’ and Timberlake’s ‘Drink You Away’ from his two-year old album, The 20/20 Experience.

The collaboration was so successful that many hoped Justin Timberlake would make the permanent jump from pop to country. While we have yet to see if Timberlake will release a full-length country album, the star did release ‘Drink You Away’ to country radio following his epic CMA Awards performance. And, just this week, Timberlake’s debut country single entered the Billboard Country Charts, proof that country fans want to hear more from the multi-talented Timberlake.

“Why miss an opportunity to have a hit?” RCA executive Joe Riccitelli told Billboard. “Justin always believed in the song. He didn’t perform it on the CMAs to have a hit. He’s just been really passionate about it.”

“The CMAs performance was a great moment and we followed up by delivering a clean version of the song to radio, so stations didn’t have to play the TV audio [or lengthy five-and-a-half-minute album version],”Sony Music Nashville’s Steve Hodges said.

Even though ‘Drink You Away’ is technically not a new song, most of Timberlake’s fans have never heard the song before.

“We’re in a day and age where the pop audience isn’t buying as many full-length albums. There’s likely a [significant] percentage of our listeners who had never heard the song until we started playing it, so it’s not really perceived as ‘old.'”

Revisit Justin Timberlake and Chris Stapleton‘s CMA Awards performance of ‘Drink You Away’ in the video below.