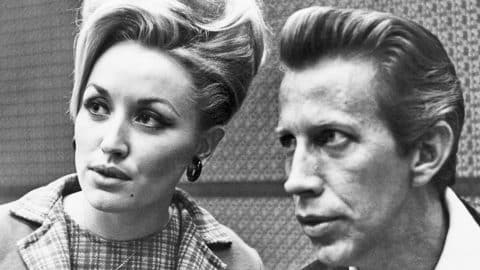 When Porter Wagoner first hired Dolly Parton as his newest female vocalist, both of their lives changed forever. The blonde bombshell was just 21-years-old at the time and his show, The Porter Wagoner Show, was her big break.

For almost a decade, Parton stayed on the musical variety show and became a very accomplished vocalist and musician. During a recent interview with Closer Weekly, Wagoner’s daughter, Debra, opened up about their deep connection.

“She helped reignite his songwriting and rejuvenate his career,” Debra revealed.

The pair had many hit duets, and even earned the CMA Award for Vocal Duo of the Year three times. The two country icons had embarked on a journey that would stay with them forever. Wagoner was one of the most influential men in Parton’s life, and helped fuel her wildfire career.

Although Parton was experiencing a growing amount of success from her time on Wagoner’s show, Debra admits that she had bigger plans.

While Parton was only obligated to stay on the show for five years, she ended up staying a total of seven. Trying to chart a new path always turned into a battle with Wagoner, so she had decided to write him a song to say goodbye. The very next day, she sang her to-be hit song, “I Will Always Love You” and it brought him to tears.

“He said, ‘That’s the prettiest song I ever heard. And you can go, providing I get to produce that record.’ And he did, and the rest is history,” Debra recalled.

Just five months before he passed away in 2007, Parton performed the same song in honor of Porter at the Grand Ole Opry.

“There’s no doubt that they loved each other,” Debra said.

The daughter of the famed country host and musician also revealed that they have always considered Dolly as part of the family and admitted that she had “been there for [them] on all the most important days of [their] lives.”

“She came to our dad’s bedside two hours before he passed away,” Debra told the magazine. “It meant everything in the world to us as family for her to share that time.”

What a touching and beautiful relationship these two shared. Although they had no romantic relationship, their bond obviously was one of the strongest ever.

Watch Dolly Parton honor Porter Wagoner at the Grand Ole Opry in the video below as part of their touching journey through music!