‘9 to 5’ Gets A Fiery Makeover From Reba McEntire 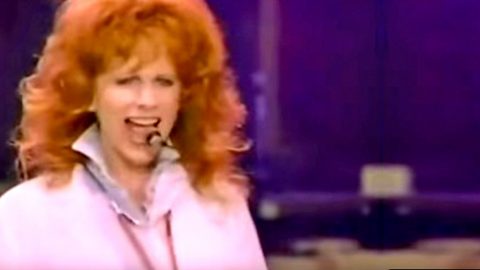 Never before have you seen a tribute to Dolly Parton’s hit that’s this good!

Reba McEntire and Dolly Parton have been some of the most loved and cherished female superstars in country music for decades. Beyond that, they’ve also been great friends!

It was through this shared connection for their love of country music, their friendship, and appreciation for incredible hit songs that Reba’s 90s tv concert event got a dose of Dolly’s magic.

A huge night for television, Reba’s NBC concert special drew thousands and thousands of viewers for what would later be known as one of the best television concerts ever recorded.

During this special event, Reba threw some added touches, sparkle, and special effects into the mix – along with some great covers of cherished country hits.

While performing a fired-up version of “9 to 5”, Reba spins around the stage with her backup vocalists and dancers helping her though several concert changes. Nearing the end of the song, she climbs into this small trunk that held all the costumes before while her singers continue the song.

But wait until you see what happens next!

Watch Reba’s dazzling cover of “9 to 5” and her special trick in the video below!