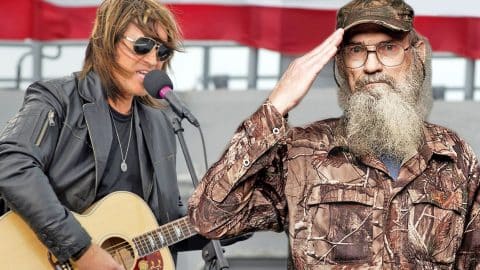 What do you get when you put Uncle Si and Billy Ray Cyrus on the Grand Ole Opry stage together? An amazing tribute to our military.

As we all know, Cyrus broke out in the country scene after the success of his chart-topping single “Achy Breaky Heart” in 1992.

The album “Achy Breaky Heart” appeared on also included three other hit singles. Although he had major success from the album, its title track, “Some Gave All”, did not gain popularity like the rest of the songs.

“Some Gave All” is a tribute to soldiers and veterans who have given so much to their country. It tells a story of a veteran that recalls the sacrifices that his fellow soldiers made.

Duck Dynasty’s Uncle Si, a Vietnam War veteran, is a huge advocate for the veterans of the United States military and jumps at any chance he gets to honor them.

He was asked to honor veterans by helping Cyrus sing “Some Gave All” at The Grand Ole Opry.

Rising country singer Amber Brooke Taylor kicked off the performance with a beautiful rendition of “America the Beautiful” before Cyrus and Uncle Si got to singing.

Si finished the amazing performance by saying, “America, never forget! Some gave all.”